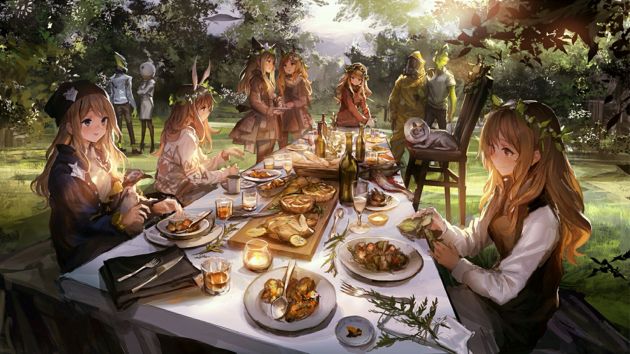 This page discusses the requirements for food by humanoid characters; for further details about quality of food and cooking, see Nutrition & Preparation of Food

Food is necessary for the survival of characters and creatures alike. It may be purchased in market places and, if not eaten, must be stored properly or it will spoil.

The amount of food that must be eaten is divided into 12-hour periods, or "½-days". This is so that if characters participate in combat in the morning, while resting in the evening, the amount of food required is different for each ½-day period.

From this, we may presume most of the food eaten by character's is consumed in two primary meals (with nibbling taking place throughout the day). The amount eaten depends on the energy required of a given activity. The table below indicates how much food is required for each activity type.

This is very strenuous work, requiring all of the character's doggedness while incorporating stress, cuts, bruises and torn ligaments. Restoring the body after combat needs a great deal of food. However, if a combat can be resolved in three rounds or less, without receiving damage, combat may be counted as "labour." Specifically, if up to four attempts to hit by the character with a weapon, or two spells are cast, the activity counts as "combat." Light combat lasts from 4 to 10 rounds in a 12-hour period. Hard combat describes any combat that lasts for 11 rounds or more.

This includes any steady activity, such as travelling, manual labour, managing animals or vehicles, repairs, looking after the health of others or continuous use of a sage ability. It may be assumed that if the character is tired at the end of the period, labour took place. The category also includes those who are healing from an injury, who therefore need more food than merely resting.

Describes characters participating in a minimum of physical activity: healing hit points, casual reading, shopping, visiting an event or tavern, meeting friends, being transported on a ship or wagon and so on. It may be assumed that if the character is at ease, and hasn't rolled a die during the period, rest took place.

Characters may choose to live on half rations of food for a grace period equal to ½-day per experience level, without penalty or after effect. A period of this length is called Slimming. Slimming periods must be a minimum of seven days apart, or else those days are treated as "fasting."

For example, Desmond is 4th level, a constitution of 13 and a weight of 180 lbs. He can therefore fast for two whole days without consequence, and for 6½ days after that. By that time he will have reduced his weight to 174 lbs.; the fraction is ignored, provided he begins eating in the 12 hour period after the half-day on half-rations.

After fasting, the lost weight must be replaced until the character is again at his or her ideal weight. To restore 1 lb. per day, Desmond would have to eat 2 additional pounds that day (in either ½-day period) over and above the normal requirement. Up to two full pounds can be regained each day, no more. Until the ideal weight is restored, the penalties are abolished, but the character's constitution remains lowered by 1 point.

Once the grace period for fasting is gone, it no longer matters if the character eats half-rations or none at all; in either case, the character begins to starve. Thereafter, on any day when the character fails to eat a full compliment of food they need over a 24 hour period, the effects of starvation are felt.

Each day, the character must make both a strength and a constitution check. If the check fails, that ability stat is reduced temporarily by 1 point. The penalties described above for fasting and the required malady checks continue, as does weight loss.

While starving, the character can no longer naturally heal through rest. Death occurs when the character's hit points are lost through maladies or combat, or when either ability stat falls to zero — and if the character's weight drops below 45% of normal.

A little food, sufficient for a ½-day period, allows the character a chance to restore strength or constitution, again by making checks for each when the food is eaten. A successful check restores that stat by 1 point. This is possible each time the character receives enough to eat in a ½-day. However, until the character has restored both strength and constitution, and eaten enough food to restore all their lost body weight to the point when fasting ended, the character is still considered to be starving.

If double the amount of food sufficient for two ½-day periods is eaten back to back, and the character is able to rest, he or she may restore 1 day's hit points through rest.

Clearly, to return to normal, the character must eat enough food to (a) restore his or her ability to rest; (b) win back all of his or her strength and constitution back through ability checks, except for 1 grace point of constitution that results from fasting; and (c) eat enough extra food to restore their body weight to the equivalent of fasting. Until this time, they will continue to be -2 to hit and -1 damage, and still be subject to one malady check a day (though, if restricted to bed rest, many of these results can be discounted).

From this, it can be seen that a character, allowed to occasionally eat, might survive in a state of starving for a very long time, with body weight swinging back and forth along with the character's ability stats. It can also be correctly surmised that halflings, gnomes and elves are considerably more threatened by starvation than other races.