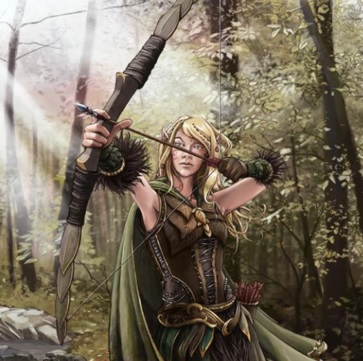 Characters of a given class have proficiencies based upon what their instructors were willing to teach, according to their prejudices. Depending on the class, players may have many choices or few. When choosing a weapon for everyday use, characters should consider power, the cost of the weapon, its utility, special factors concerning its use, the weapon’s effect upon certain monsters, the range, the weapon’s weight, how many hands it requires and whether the weapon is made for hand-to-hand combat, or melee, hurling or firing. Choosing a weapon can be a difficult aspect of making a character that survives.

At the start, characters are able to employ a limited number, which may be affected by the character background generator. The first table shown indicates the weapons from which a character can choose, based on their class. These are weapons in which the character has received some training, during the time they received their class instruction. Further training is possible, but not at 1st level (see below).

The complete weapons list shows the damage that weapons cause, the number of hands needed to wield them, the chance of their breaking in the case of a fumble and the type of weapon they are (hand-to-hand, hurled or fired).

Note that characters are limited from using any weapon that is longer than they are tall, with the exception of pole arms, which are designed for a particular kind of fighting. Pole arms include the corseque, glaive, guisarme, halberd, lance and pike. Lances may only be used on horseback.

As the character improves in level, new proficiencies may be acquired to augment the character’s versatility. These weapons may be chosen from the lists above (the only weapons the character is able to use at all), or some character classes may receive instruction in gaining a different weapon, if they make the effort.

Thus, a 1st level cleric would gain a new proficiency at 5th level, then another at 9th and another at 13th. A monk would gain proficiencies at 3rd, 5th, 7th, 9th and so on.