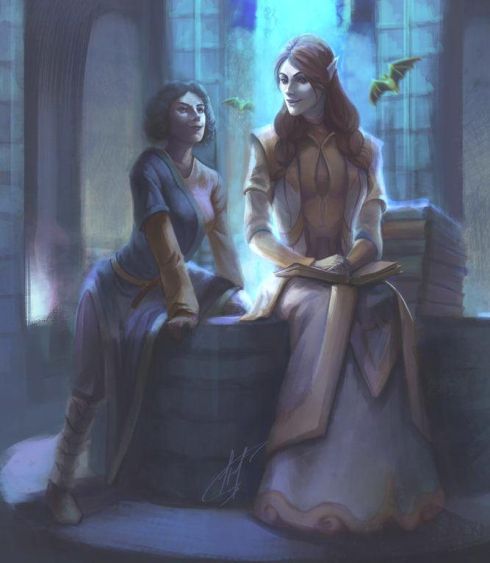 Instruction is a sage study in the fields of Salon and Training, that imparts knowledge points that the character has to other persons. In addition, the character is able to teach courage and basic sage abilities, such as literacy, enabling individuals to become soldiers and scholars.

The tutoring character must first have at least an amateur status in Instruction, and must possess at least triple the amount of knowledge that might be taught. For example, an amateur instructor with 10 points of knowledge in swimming would be able to teach 3 points to a student; this may not be enough to raise that student to where he or she is an amateur, but even a single point in many skills can make a difference — while student with 3 points of knowledge in a given ability may complete their training elsewhere from a better instructor.

The instructor cannot increase another character's knowledge in any study beyond 12 points. Once the student has reached that threshold, further comprehension of the study must be gained through personal experience.

Knowledge is divided into two categories: physical and cognitive. Physical skills relate to training the student's musculature, build and reflexes, for sage abilities such as swimming, running, diving or climbing. Cognitive skills require 3 pts. in the ability to read and write before other instruction can be given; cognitive instruction may be artistic, such as acquiring artisanal skills; socially relevant, such as skills in law, religion or the occult; or scientific, such as instruction in alchemy, geology and medicine.

A physical knowledge point requires 2 weeks of training, after which the character rolls an abilities check in both strength and intelligence; a success in both indicates the character has acquired a point of knowledge. For each point of knowledge above 1 to be gained, a penalty of -1 is applied to both checks. For example, Gerard wishes to gain his 7th point in swimming; he has a strength of 16 and an intelligence of 10. When he rolls, he gains a penalty of -6 to both, meaning he must roll 10 or under for his strength and 4 or under for his intelligence (on a d20, of course). Naturally, Gerard can repeat his two weeks training over and over, until he succeeds in both rolls.

Instructors can teach knowledge points to a maximum of eight individuals per week.

Instruction is always given in specific abilities, NOT studies. A character who begins at 1st level with 8 pts. of knowledge in a given study has spent their class training having each ability inside that study raised to that amount.