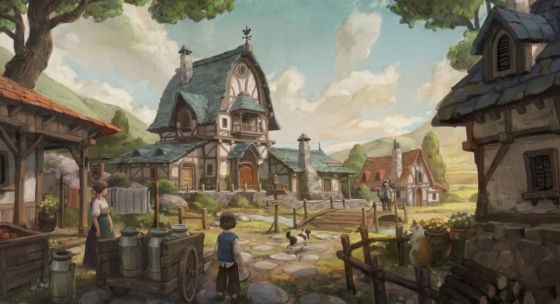 Villages are clustered communities of humanoid settlement, larger than hamlets but smaller than towns. They have populations ranging from 201 to 1,000 persons. Independent villages are located in type-4 hexes, but villages may occur as attached neighbourhoods related to both towns and cities. Some villages may also be settlements, regardless of the hex type.

Villages contain various fixed dwellings and facilities, as well as vegetable patches, orchards, green spaces and animal enclosures. Settlement villages may possess minor fortifications but most villages don't. Villages built upon a water course may include a ford, bridge or ferry, or may be a transshipment point. Usually a riverboater can be hired if no regular service across the river is available.

Most occupants of a village work upon surrounding fields, walking out to them in the morning and returning at night. Authority is shared between one or more wealthy squires and a village council. Better than 9 of 10 villages possess a church or temple, with the cleric acting as a moral guide and benefactor to the community.

Villages have a small but steady movement of persons upon roads or routes that join with the outside world. This creates a moderate demand for goods and services which culminates in "market days", where local handicrafts, materials and stores can be purchased. The choice is limited and can't compare with a market town, yet common goods and food can be obtained in small amounts. Market days traditionally occur on days of rest and relaxation, such as holy days or during festivals. Peasants able to set down their labours join in order to share company, play games, have a bath, exchange news, sell what they have to strangers and barter. News from outside is highly valued, as are regular visitors.

Villages near to one another often make arrangements to share market days back and forth, so as not to compete with each other. Some vendors take hand carts back and forth, to benefit from a new group of buyers at each village.

Facilities that contribute to traffic include boat docks, carter posts, hostels, quays, shearing stations, shrines and way stations, each of which draws in or services travellers. The local temple contributes to this movement also. Large villages possess a blacksmith also.

Trade is supported by the cottagecraft making of surplus goods. Raw materials earmarked for artisans are brought in, while crafted articles are collected and shipped off to guilded markets. Articles may include tools, pots, blankets, polished gems, pressed oils, powdered dyes, frankincense, resin, honey, glass ornaments, carved bone, planks, wine, cheese, toys, ponies and hundreds of other items. None of these are sold on market days in the village, however, as the artisans are contracted to ship these items elsewhere. None the less, there are often one or more "agents" bivouaking at a nearby waystation while waiting to deliver or pick up goods.

Villages are peaceful communities, acting cooperatively to maintain order. Serious crimes are non-existent, with pilfering and personal disputes creating the most trouble. Authority is exercised through influence rather than dictate, since local matters primarily address the maintenance of land, recovery from bad harvests or natural tragedies, the general welfare and — rarely — expansion of some kind. These affairs are addressed by the village council, or elders; these are persons selected for their charisma, experience, wisdom and personal power. Most communities tend to have 3-12 council members, with no set number. Rather, it depends on how many persons have the qualities just listed. Such communities create a fair and free undercurrent that everyone in the community feels.

The most important person in the village is unlikely to be a member of the council; he or she is a "squire," though they may be known by many other titles in other lands. There may be more than one. A squire controls a large house and an expansive property; numerous persons in the village may live on the squire's land and pay rent. A squire won't be a member of the nobility, but often wishes to be — and in any case will count many petty nobles among his or her friends. Therefore, a squire cannot collect taxes, nor hold authority by virtue of title; squires most often come into being over several generations, as one or more families accumulate more and more wealth through luck, innovation or participation in an adventure.

The village council exists to hold the squire's power of wealth in check. Squires seek to influence local expenditures and decisions for their own benefit, while the council is concerned for the general residents. Ground must be given on both sides; each squire brings great wealth into the community and is a resource in times of need; at the same time, a squire depends upon a cooperative labour force and the council's support as a matter of status and hearsay, as rumours, good and bad, may reach the ears of a squire's would-be friends or enemies.

The best force to keep the peace is the local priest or cleric, who may claim impartiality by virtue of having concerns not of the material world. As such, the priest can see both sides to every issue and offer guidance to both parties. It can be noted that a cleric often possesses the wisdom to "seem" as though he or she is clearly on the side of the council against a squire, while in fact acting entirely on the squire's behalf. Many clerics also like to be rich, while advancing their status.