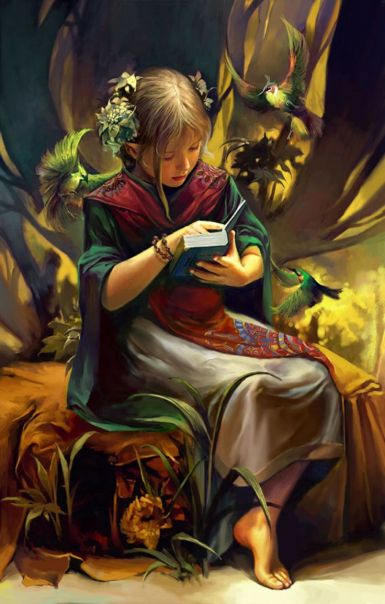 An ability stat, the measure of the character’s ability to discern the best course of action according to their common sense, insight, education and unbiased judgement. Characters with a high wisdom tend to be more virtuous than other persons, with a capacity of judging rightly the means and ends of things.

Wisdom affects the saving throws of characters, so that they are either vulnerable or resistant to magical attacks related to fascinate, charm, fear, hypnosis, illusion, mental control, possession, suggestion and other like powers. The bonus is given on the table shown.

Wisdom also grants additional spells to clerics and druids. This spell gain is cumulative, so that a character with a wisdom of 14 would gain two 1st level spells, while a character with a 17 wisdom would gain a 3rd level, two 2nd level and two 1st level spells altogether. These spells are not gained until the caster reaches an experience level at which the spell level indicated can be used.

If a cleric or druid has only barely sufficient wisdom to become a member of that class, equal to 12 wisdom or less, there is a small chance of spell failure. This is rolled at the moment a spell is discharged; if a percentage roll is less than the chance of failure, the spell has no effect. It can be relearned, of course.

The following attempts to capture some feeling for how wisdom manifests according to the number of wisdom points possessed, from the character's perspective and from that of others.

A full representation of any ability stat must take into account that not every person of a particular total wisdom will adhere to the framework presented. This is only a model upon which further categories can be devised.

Such characters will have a host of bad habits, beginning with not caring much if they live or die. They will drink heavily and pursue numerous vices such as opium and tobacco, gambling (which they will often lose at, since they're unwise about betting), poorly considered partners for sex and such. They ignore religion and their families. They cannot read or write, not because they weren't taught but because they can't or won't learn; thus, they have no education of any kind. The only class they can become is a thief — but they're usually unable to suppress their anger or work well with others. They become are cutthroats and muggers. They do not hunt for their victims; they haven't the foresight. But characters of this wisdom are usually laying drunk in an alley, or doped, and are thus ignored when some chance passerby presents the thief with an opportunity to kill and get more money for drink, drugs or prostitution.

These characters live on the streets and has no responsibilities. They talk too much, they brag too much; and they're proud of every rotten thing they've done; they often get themselves caught by confessing too loudly in the wrong company. Once drunk, they are often robbed themselves; but they don't care.

The character has some modicrum understanding of judging good from bad, but helplessly tends towards bad behaviour anyway. When clubbing someone in an alley, they will restrain themselves from actually killing the victim ... but they'll steal and spend the money unwisely just the same. If a thief class, they can remember learning their letters, and that is all; they can't read or write beyond that. With this level of wisdom or lower, the character's class skills are self-taught, more or less instinctive, even with things like forgery or burglary. No other class except thief is possible. Drink and addictive substances are still a craving, but these characters are moderately gregarious. They laugh too loudly and are too concerned with themselves, being narcissistic and uncaring about what others think. When pressed, they still only think of themselves first, and others barely at all. But at least, they do think of others occasionally. They have temporary addresses at best; a hostel, a flop house, a regular hole they've found; but usually they're found and forced to move on, until they can find another shelter.

Characters of this much wisdom will maintain an address and pay rent; though they are often evicted, as they have little respect for money or responsibility. They over-indulge, but they are aware it is over-indulgence and they can make themselves stop if there's a reason. They're able to make a friend or two, though it is usually with someone like them — a person down on their luck, half in the street, habitually criminal in nature. A character with this much wisdom can become only a member of the thief class; they tend to pursue criminal habits such as smuggling and selling illicit substances. They often mug victims without killing them, and have learned enough to make plans about where and when to mug someone. They are wise enough that they're caught only once ever few months, and rarely for things that will get them hanged or long-imprisoned. Anyone with this much wisdom or less will take too many risks; recklessness is an intrinsic flaw that the character is too proud of having.