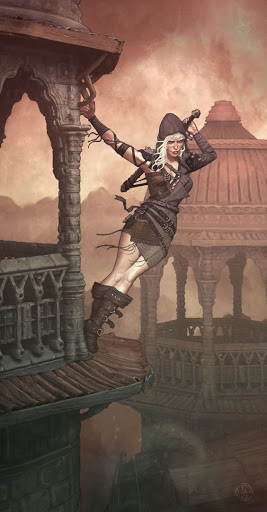 An ability stat, describing the movements and actions of the bone structures, placed in two groups. The first describes the movement and coordination of the arms, legs and other large body parts, related to running, crawling and swimming. The second involves smaller movements of the wrists, hands, fingers, feet and toes, related to smaller actions such as picking up objects, writing well and even blinking. These two forms comprise the character’s coordination.

Dexterity also includes reflexes, skill at targeting opponents and reaction to immediate threats, as determined by the game mechanic, initiative. The table shown indicates an adjustment that dexterity gives to the character’s armour class (AC). This is the amount by which AC is improved. The negative dexterity of 4, for example, would make the character’s AC worse by three points ~ it would not adjust a 10 AC to 7, but rather to 13. Conversely, a 17 dexterity would improve a 10 AC to 7.