Lamassu are protective beasts possessing a human face, with the head and horns of a bull and the body of a lion. They are able to fly with the enormous wings of an eagle. While intrinsically philosophical in nature, their lassitude regarding human affairs has arisen from a sense that humanoid vices leading to corruption and conflict are irredeemable. While they remain kind and willing to help, lamassu have grown weary with human affairs and are rarely willing to become personally involved in conflicts. They live a very long time — three or four thousand years at least — and can remember "the old days." Enervated and apathetic, they are difficult to arouse to action. 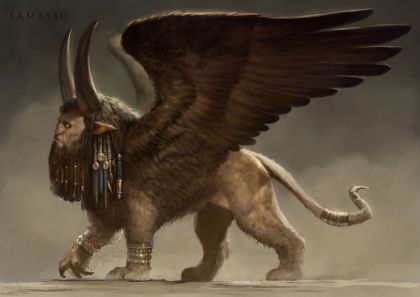 Perceived as gods by the Akkadians, they were welcomed as guests of the palace of Sargon II, where as many as seven lamassu could be found "discoursing and contemplating the matters of politick and well-mindedness." They acted as the protectors of the Akkadian and Sumerian peoples, but through the centuries these beasts became complacent and obscure. When Sumeria fell to the Gutians (ogre and pre-haruchai peoples) in 2093, the lamassu could not be found.

They re-emerged for a brief period in during the 3rd dynasty of Ur, far fewer in number and far less interested with human affairs. Thereafter they retreated to solitary isolation, where they have remained to this day. It is supposed that there are less than twenty of these beasts throughout the world, and that though peaceful in nature, they are resistant to contact and territorial in nature.

Through the use of dimension door, they are able to travel vast distances in the blink of an eye, sometimes using such doors to rid themselves of unwanted visitors. If they do not wish to be seen, they may turn invisible at will. They are surrounded by a protection from malevolence, much like a paladin, so that others within two hexes of the lamassu are protected as well. The armour class shown incorporates the +2 bonus of this protection.

As further defense against magic that might be used against them, lamassu also possess a 30% magic resistance. When hard pressed in combat against evil beings, they are able to use a holy word as a natural ability.

They are also the equivalent of an 7th level cleric with an 18 wisdom, granting them spellcasting powers. These are not natural abilities and take time to cast and discharge. These include:

Lamassu will look upon interactions with outsiders as an intrusion. Even so, they will use the powers they have to aid or sustain those whose cause is just, in the lamassu's mind. The beasts have no religion, so their use of spells is not limited to "believers."