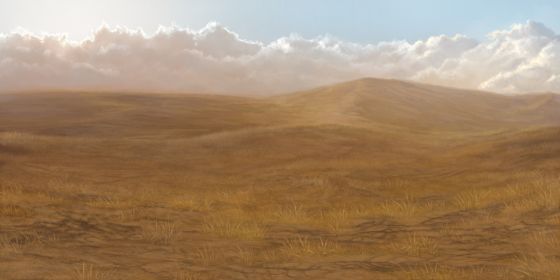 Barrens are dry grasslands with extant areas of sand, gravel or bare stone. The soil is relatively dry and poor, though they support herds of grazing animals, both wild and domesticated. They are widespread in cold climates and upon very high plateaus, where the vegetation growth period is not long enough to sustain trees. Typically, they receive less than 18 in. of rain per year. Agriculture is sparse and limited to river valleys and particular river deltas.

Grasses are able to survive in diverse climate conditions, so they may grow in areas characterized by warm summers and bitterly cold winters, where most other plants could not thrive. This allows large grazing animals to also thrive upon these grasses, though considerable migration is necessary because any part of the barrens cannot support these herds for long. Herding is nomadic, with patterns of movement that range hundreds of miles, often moving from lowlands to highlands over ten thousand feet, to make best use of forage at different times of the year.

Travellers in barrens are especially vulnerable to attacks by large predators and beasts, who may strike from the air or conceal themselves by burrowing nearby herds. Rodents proliferate, as huge underground warrens can be built, allowing populations of tens of thousands of these animals spread over hundreds of square miles.

Often called "heathlands," barrens are characterized by short vegetation, sparse tree cover and exposed bedrock. These are lands subjected to consistent windy conditions and salt-spray. They are very damp and humid, with much rain and drizzle, but as the soil is infused with salt, little grows except heather and gorse. Mires may occur where the drainage is poor, but are usually only small in extent. Birds are common.

Barrens can describe the edges of several major deserts, as they act as a transition zone between deserts and more fertile lands. Additionally, a large barren land may have one or more small deserts within its boundaries, where the soil is at its worst and even grass does not grow. Below is a list of the extensive barrens in the world:

The following is a list of elements and features common to barren ranges:

The following monsters are common to barrens ranges: