Kobalds are diminuative humanoid creatures with some reptilian features that are closely related to goblins. They possess a long, snaking tail slightly longer than their legs, and have flat, lizard-like skulls that may or may not possess elaborate bony ridges, spikes or horns. They are not particularly bright and are the only widespread humanoid that has no distinct homeland. Kobalds are scattered throughout the Eurasian continent and have been encountered as far south as Madagaskara. 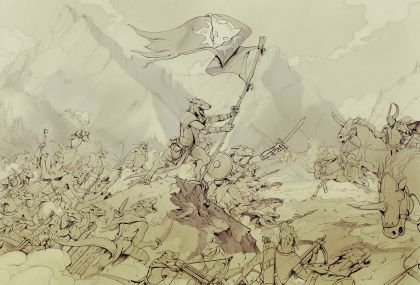 Kobalds appear to have emerged from the Kodar Gate in the last years it was open, after hobgoblins, goblins and norkers had established themselves. The kobalds were preyed upon, enslaved and later granted subordinate roles within the larger entities of Vostoch, Trakkatch Dran and Magloshkagok. They began to attach themselves as mercenary soldiers to westward-moving tribes as early as the 2nd century, when they were first encountered by the Romans. In great numbers, kobalds make effective archers; they are often employed as scouts and messangers, as they are able to conceal themselves easily due to their size.

Presently they are seen as a pest, as they inhabit the underground of most large cities and will occasionally build defensive villages in isolated locales, from which they will raid farms or waylay travellers.

The deserted ruin of Jankent can still be found east of the Aral Sea in Orza-Ko, the largest community of kobalds that has ever existed. It is known from Arab writings of the 10th century. Located on the left bank of the Syr Darya, about 16 miles southwest of the present-day Jagatai town of Vozzak. On the site there are the ruins of walls up to 23 ft. high in places, enclosing an area of about 40 acres; visible elements include a broadly rectangular wall oriented east-west, given a T-shaped appearance by a southern "cross-bar." An enclosed citadel in the north-west corner; and a low mound outside the eastern gate that was used for religious sacrifices. It's estimated that the kobald population numbered nearly 20,000 when the city was razed by 1221 during Genghis Khan's conquest of the Khwarezmian Empire.

Kobalds are organized as matrilineal broods with one female attended by three males. Spawning is difficult but when it takes, a hatch of 6-18 eggs are produced, of which normally 3-12 survive (some cannibalism among the young is encouraged). Kobalds take 6 to 10 months to mature as combatants and about two years before they are ready to mate. The kobald's lifespan is between 12 and 20 years. They possess infravision and make more use of the olfactory senses then their sight. They are less active during the day but do not experience any penalties due to daylight. They prefer hot weather but are not seriously hampered until temperatures become colder than wintry.

It is common for kobalds to remain in groups no larger than a brood, though if in the outdoors it is typical for 3 or more broods to act together as a clan, which will hunt and gather nomadically. Sometimes, two clans will act in concert; if three clans gather, however, they will commonly seek out a cave, where they will begin to excavate an underground lair. However, if the kobalds are able to settle in an isolated hinterland, they may choose to build an above-ground village, with palisade, small towers and yurt-like cloth buildings only 5 ft. in diameter. Two of these is large enough to shelter half a brood and both will be built, so close that they touch, even if a brood has no children; males always sleep separate from the female. Multiple clans will be led by a council of leaders. 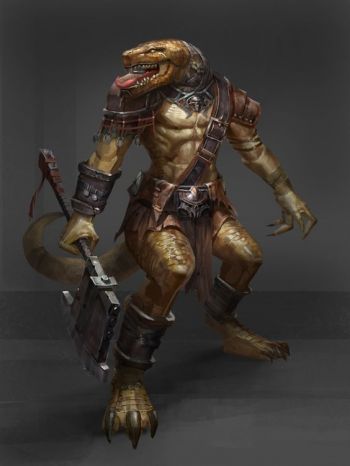 Subterranean lairs will feature small rooms no larger than 15 ft. in diameter, linked by tunnels only 3½ ft. high and 11-15 in. wide. Creatures taller than 4 ft. 3 in. will be too tall to even stoop, forcing them to crawl on their hands and knees, while creatures heavier than 160 lbs. will be unable to squeeze through in places. That is why parties of gnomes, or dwarves comprising mostly females, make the best units for cleaning out these lairs. Usually there will be one meeting room, about 30-40 ft. in diameter, and a dirt-covered pit of about the same size where kobalds will keep rothe for meat.

Tribal groups of more than three clans are unheard of, except when under the rulership of chieftains of another race. In such cases, three clans are usually led by a sub-chief. Large contingents of mercenary kobalds are still used by goblinish peoples.

Common kobalds will be proficient in just one weapon; below ground, this will be a wooden club. Above ground, a spear is preferred. At best they will have padded armour or a wicker-work shield (but not both), which will adjust their natural armour class (AC) to 6. Hits to the shield (rolls to hit that miss by 1) will force the flimsy shield to save vs. crushing blow; if the save fails, the shield is smashed and the attack succeeds, causing damage normally.

Leaders & Sub-chiefs have studied in the domestication of wild boars and giant weasels, with which kobalds have an affinity. There is a 65% chance that these kobalds will be mounted upon a wild boar, with saddle, stirrups and bridle, using a spear as a lance (1-6 damage), which will do double-damage on a hit. Among those leaders without a mount, there is a 70% chance they will have a giant weasel as a guard animal. All leaders & sub-chiefs will have two proficiencies, having mastered a short sword; the second weapon will be either a javelin or an hand axe, depending upon their access to metal. Neither leaders nor sub-chiefs will employ a shield, as they wish to keep their hands free for throwing weapons. Leaders will wear leather armour (AC 5) while sub-chiefs will have studded leather (AC 4).

All the weapons named (except the lance) cause 1-4 damage, adjusted for the kobald's size.