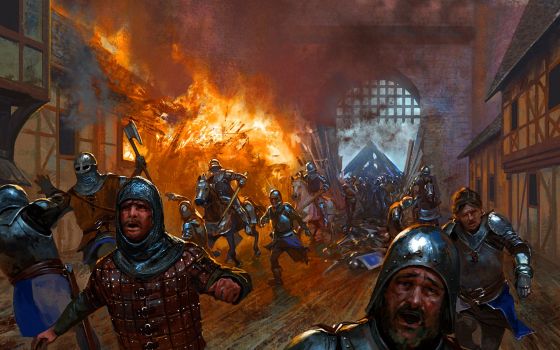 Morale describes the confidence, enthusiasm and discipline of a person or group at a particular time, depending on recent events that occur in combat. Morale does not affect player characters, but it does affect both allies and enemies. The effects of battle on morale depends upon the amount of training the combatants have and their willingness to stand their ground. Morale is improved by circumstances such as leadership, belief and the consequences of failing to defend a position. Morale is measured as a number between 2 and 12, with "2" indicating fanaticism and "12' indicating certain cowardice. To succeed against morale, the number must be met or exceeded on 2d6. Otherwise, morale is considered to have failed and the combatant must either give ground or flee.

A morale check is made whenever an NPC, usually a hireling or follower, has witnessed or experienced some troubling circumstance that encourages them to withdraw in haste. These are called Day-to-Day Checks. Alternately, life-threatening situations, such as combat, may cause the NPC to flee in fear rather than hold their ground. These are called Combat Checks.

When engaging in combat, most Non-levelled non-player characters (NPCs) are considered to have a standard morale equal to 9. This describes both hirelings and followers at the start of their association with the players, whether or not those NPCs have received combat training, unless these are levelled persons, in which case their morale would be 8. Children younger than 14 have a standard morale of 10.

When an NPC associated with the player characters witnesses, or hears from a credible witness, that something has happened that compromises the NPC's values, their continued association with the party is put in jeopardy. Examples include the flagrant use of lies and deception, reckless disregard for the safety of others, appearing to abandon others, consistent disregard or irresponsibility towards the NPC's stated role, failure to provide pay, a lack of remorse towards those who are hurt or mistreated, gratuitous theft and the performance of capital crimes. So long as any NPC associated with the party has reason to believe the party is capable of such actions, they must make a morale check immediately.

Depending on the NPC, a morale failure at this point will have varied outcomes. If the NPC is far weaker than the party and has no official duties, then probably the NPC will attempt to slip away unseen. An official would confront the party and perhaps threaten them with sanctions, depending on the official's responsibility. A friend of the party might demand an explanation; and failing to receive a good one, might end the friendship. Anyone strong enough to confront the party would certainly demand reasonable amends for the indecency perpetrated. And if enough NPCs became aware of the party's doings, they might spread rumours that would make it difficult for the party to hire NPCs or make friends in the region, so that a morale check would have to be made before anyone agreed to work with or for the party.

A successful morale check would not necessarily mean that the NPC would condone the party's actions. The DM should make a decision with regards to each NPC. Either the NPC is the sort who is content to wallow with the party, or endure them, until some worse thing is perpetrated, in which case another morale check would not be necessary unless the party sank lower in their behaviour, or the NPC has chosen to "wait and see," in which case the next incident should be rolled with a -1 penalty on the morale dice.

For example. Jarod, a party follower with a morale of 9, sees Kendra and Leopold threatening and physically abusing a shop keeper for information. He rolls a "9" on 2d6, which succeeds against his morale, so he does not choose to abandon the party. Because he is only a muleskinner, he decides to say nothing; perhaps, because of the circumstances, he is willing to let the matter go. But the DM decides that a doubt has been stirred in his mind. Therefore, when three days later, the party breaks into a private house in order to have a place to say, Jarod feels compelled to roll a morale check again. Again he rolls a 9, but this time, because the die has a penalty of -1, it counts as an 8. This is below Jarod's morale, so he packs up his things and quietly leaves the party in the middle of the night, wanting nothing else to do with them.

There are four kinds of morale check that are made in association with combat: bravery checks, boldness checks, panic checks and rallying checks. All four are resolved in the same manner, like the morale check described above, but each relates to specific circumstances.

While combatants who are hardened through combat training are ready to engage in combat when necessary, most commoners lack the nerve to do so. To will themselves into combat, these ordinary nonbelligerents must roll a bravery check equal to their morale. A successful roll on 2d6 allows them to enter into melee, or hand to hand combat, like any other belligerent, but a failure will indicate that they are too frightened to engage directly.

Under dire circumstances, such as defending their homes and family, or their goods when travelling, those who have failed to be brave will be able to fire or hurl weapons, so long as they do no approach closer than 4 combat hexes from any combatant (friend or foe) engaged in melee. If necessary, these commoners must give ground as a priority over any other action, retreating until reaching this four-hex distance. If rushed by an enemy, the commoner will break and flee, running until they have put off the pursuit and are out of sight, which includes finding a practical hiding place. If cornered, they will fall on their knees and plead for their lives. They will not receive another opportunity to make another bravery check until a full day has passed. If they do make an attack with which they have the potential to cause damage, they are to receive a hireling's experience share.

Bold combatants are those who are able to take damage and keep going. For commoners, this amounts to any damage; but for those who have combat training, the damage must be sufficient to stun lock the combatant, before a boldness check is called for. A successful roll in either case indicates that the combatant is bold enough to shake off the blow and remain in the fight; a success also means that the combatant's morale is improved by one point.

For example, combat-trained Fayln has 12 hit points and a standard morale of 9. Entering into a fight, she takes 2 points of damage. If she were not combat trained, this would be sufficient to force a boldness check; but instead she is good to continue because 2 damage is not enough to stun her. She continues to fight with 10 hit points, and the next round she is hit again for 3 damage. This is enough to stun Fayln, so she makes a boldness check, succeeding with 10 on 2d6. Not only is she now bold enough to keep fighting, her morale is permanently dropped to 8, so in future she will have a better chance in future of making morale checks of any kind, including boldness checks.

Each time a combatant is hit or stunned, depending on their combat training, they will need to make a boldness check.

If the boldness check misses by 1 point, the combatant will not flee the fight, but will fall back one combat hex per round, continuing to defend themselves if necessary, until they are no longer engaged in melee. If the combatant has sufficient action points to both attack and move back on hex, they may do so; but if not, they must forgo an attack and prioritize giving ground. They may afterwards attempt to rally themselves as described below.

If the boldness check misses by 2 points or more, then the combatant is considered routed, and must abandon the fight and move away at a run for five full rounds, even if they are wounded and drop dead from resultant blood loss. They are simply too frightened to do anything except run. They may attempt to rally each round thereafter, once rally requirements have been fulfilled.

If any friendly NPC combatant is within two combat hexes of a combatant that has routed, then no matter what the combatant's condition, they must make a panic check. This check is made with a +2 bonus to the 2d6 rolled. A successful roll indicates that the check has succeeded and no further checks need to be made. However, if a panic check fails then that combatant will also rout — which will mean that all friendly NPCs within two combat hexes of the panicked combatant must now also roll a panic check. No more than one panic check needs to be made by any character per round.

For example, Gareth fails a boldness check and routs. Hassan, Isabeau and Jacoby, allies of Hassan, are all within 2 hexes of him and must now make panic checks as they see their fellow run. Thanks to the +2 bonus, Hassan and Jacoby succeed, but Isabeau fails, so she will run the next round after Gareth breaks. When she does run, Hassan, Jacoby and now Kendra, who is 2 hexes from Isabeau when Isabeau runs, must all make a panic check. Unless all three succeed, the one that runs the following round will continue the panic until everyone who is affected succeeds or routs.

This form of cascading panic can easily seize hold of a whole army, which might run from a fight it is capable of winning. When large numbers of combatants are involved, a single combatant with a low morale can destroy a whole army's will to fight.

NPCs that have failed their boldness or panic checks must attempt to rally themselves before they can rejoin an ongoing combat.

A combatant that has fallen back twice in an attempt to retreat from combat, or has fallen back once and who has then successfully retreated and held their ground for one round (in both cases, a total of two rounds), may afterwards attempt a rally check each round thereafter, in order to rejoin the combat normally. There is no adjustment for this roll.

A combatant that has been routed may, having fled for five rounds, attempt to rejoin the combat. They must first attend to their wounds. Then, if they are able, either with a spell, magic item, sage ability or by means of a healing salve, take steps to heal themselves. If they have no means to do so, they may ignore this requirement. Once these things are done, the combatant may attempt a rally check each round thereafter, in order to regain their will to rejoin the combat. If the combatant is within close shouting distance (12 hexes) of a cleric or paladin of the same religion, an employer, an officer or a liege of noble or royal descent, a +1 modifier is added to the rally check.

Because morale is automatically adjusted whenever the NPC succeeds in making a morale check when pressed in combat, there are no adjustments for morale due to the amount of time that an NPC has served under or for a superior. There are morale adjustments that result due to the character background generator, due to wisdom or the character's progenitor. These are potentially gained by any character class. Morale strengthening, as previously mentioned, will also improve morale.