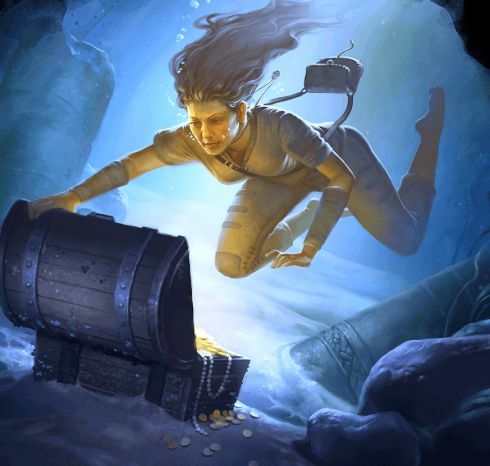 Swimming is an unskilled and amateur-status sage ability in the sage studies of Athletics, Beachcomber, Oceanography and Sea Life, that can be performed with a minimum of 1 knowledge point. It's ordinary and common when characters cannot swim, but it takes a minimum of proper training to help someone learn. Characters with less than 10 knowledge points are considered "unskilled swimmers," while those with 10 points or more are considered "amateurs."

Distance traversed by swimming depends on the amount of knowledge the character has, compared to the action point (AP) cost to travel from one combat hex to another, each hex being 5 feet in diameter. This calculation works much like the character's stride, except that the character is swimming.

Three paces of surface swimming are possible for those who have attained an amateur ability: paddling, stroking and racing. As the table shows, the AP cost for each improves as the swimmer gains knowledge; an improved AP cost means more distance covered by the swimmer in the same amount of time, 1 combat round.

For example, a amateur swimmer with 5 AP and 20 knowledge can race at a speed of 6⅔ hexes per round (¾ AP per hex) when swimming; that same swimmer could maintain a stroking pace (1¼ AP per hex) of 4 hexes.

Each sort of pace is limited in how long the character can sustain the activity. Paddling is a slow but simple swimming form; a swimmer can maintain this pace for 4 rounds per point of knowledge. Stroking is an firm, flexible movement that is easier to sustain, allowing a full 10 rounds, or 2 minutes, per pt. Racing is fast and exhausting, limiting it's duration to only 2 rounds per pt. When calculating the endurance for a character using different paces, count each round of paddling as 2½ rounds of stroking, and a round of racing as 5 rounds of stroking.

Once reaching the end of their endurance, swimmers must rest. If they are able to support themselves on something solid, or a floating object, they may restore themselves by resting 5 minutes (25 rounds). During this time, they cannot let go and continue swimming until the entire resting period has been fulfilled. Having rested, swimmers are able to count their endurance restored, so they may continue on — however, their knowledge points are considered halved in calculating this next swimming "leg." After a second rest, the swimmer's knowledge is quartered.

For example, Toby has 24 knowledge points as a swimmer when he begins the first leg of his swimming effort. He swims at a speed of 4 hexes per round for 240 rounds, covering 960 hexes, whereupon he happens to reach a boat he can hold onto. He rests and then continues on, with his 24 knowledge counting as 12; again he swims at 4 hexes/round for 120 rounds, whereupon he catches hold of another boat, 480 hexes on. He rests again, then determinedly sets off, now with his knowledge counting as 6. With his third leg, he covers only 240 hexes; with a fourth leg, he could do no better than 120. And so it goes until Toby is completely exhausted.

Once complete exhaustion has occurred, the character must emerge completely from the water and wait one full hour — whereupon he or she can begin the process again, starting from half-knowledge points. Characters with amateur swimming must stop swimming for the day when they are completely exhausted for the second time. Only six hours of sleep can restore them again.

If a character reaches a place where they must rest, and no rest is available, they drown.

At any time, amateur swimmers may tread water for 20 rounds per knowledge pt. This does not count as "rest!" Treading water allows the character to take stock of their position or wait for aid, should it be available. Should a character not know where he or she will rest when they reach exhaustion, it's well for them to hold back some energy for treading water, in case they're able to see a place to rest that was previously hidden by waves or distance. Remember that a "place to rest" can include floating debris, which might be all around the character but invisible while actually swimming.

Amateur characters cannot "drownproof." They have never been taught to do so, and it's worth remembering that the practice did not exist historically until 1940. However, characters with better swimming skills do possess this skill.

Unless a character possesses a certain background or the sage ability, they cannot swim at all. Backgrounds are determined by the character background generator, which could indicate the character was raised by fisherfolk, sailors, boaters, explorers, shipwrights or buccaneers. Those raised by pirates often cannot swim, as most who become pirates receive no training as such.

When swimming, so long as a character's arms and legs possess complete freedom of movement, and the hands and feet are bare, encumbrance may be pressed to just shy of losing 1 point of AP without affecting the character's ability to swim. However, if the character loses 1 AP due to encumbrance, then he or she counts a loss of 2 AP towards their ability to swim. A second point of AP due to encumbrance counts as a loss of 4 AP in swimming. Thus, if a character needed 2½ AP to swim a single hex, he or she would be unable to do so, even while paddling.

If the character can breath water, whether as a spell or an ability, then it may be possible for an encumbered character to sink to the bottom and move along, without fear of drowning.

Natural currents and wind have their own affects on swimming, making it difficult for swimmers to maintain their equilibrium or keep on course.

Rivers can flow at speeds up to 120 ft. per round, whereas rip tides in the ocean can move up to 96 ft. in the same time period. When swimming in currents that move faster than the swimmer, there is a high risk of the swimmer being overpowered by the water. If this happens, a swimmer can be dragged into whitewater that makes it impossible to reach the surface, or thrown against rocks and ledges in and along the river bed. With a rip tide, the swimmer can be put so far out to sea that it's impossible to swim back. This is why swimming in any current faster than 12 ft. per round is very dangerous.

Remember to take into account the movement of the current when calculating the swimmer's vector across a water's surface. Once a swimmer has been overpowered, they can be saved only by outside assistance or by chance. Generally, allow a 1 in 6 possibility each round that the swimmer chances to grasp a rock or some other surface that allows them to arrest their downward passage. Each failed roll causes 4-10 damage from being pummeled upon the stream's bed or strain on the character's lungs. Even if purchase is somehow found, the overpowered swimmer must be saved by outside means, since he or she will be too weak, cold and wet to climb out with their own strength (no matter how strong they are!). If they are not saved, sooner or later their grip will falter and they'll be dragged through the river again, sure enough to die eventually.

A 1 in 10 chance of the character being thrown on to a tiny beach or a rock bench, where they can rest or lay without straining themselves, is a reasonable possibility. The DM can increase this chance, but a happenstance like this is probably more of a 1 in 100 chance rather than 1 in 10. 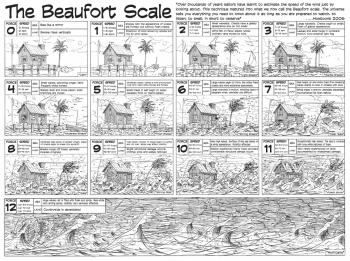 Note wind forces of 3 or greater

Similarly, winds that blow faster than 8-12 miles per hour (F-3) create large wavelets, as crests break on the surface. This adds an additional a movement cost of +½ AP when swimming. With greater force (F-4), frequent white horses occur, with a movement cost of +1 AP. As a fresh breeze takes hold (F-5), anything beyond paddling is impractical, while a strong breeze (F-6) disallows any swimming at all, though it's still possible to tread water. An F-7 wind, a near gale, makes even this impossible. Those caught in the water in a near gale without some physical means of staying afloat will drown within 2-5 rounds.