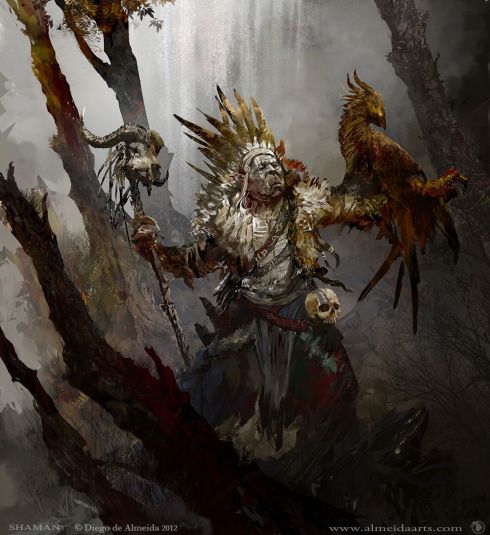 Mysticism is one of the first technologies a region develops, enabling the rites and practices that will enable unique individuals to reach an enlightened state of consciousness.

Like all technologies, the development of mysticism is distinguished by its techniques, processes and social relationships. The page below describes the technology according to its sub-technologies (shown as minor headings). Details are further classified into tools, culture, blocks, improvements and associated references.

Enables communication with benevolent and malevolent spirits, whose threat is mitigated by the presence of a tribal shaman. Through religious ecstasy and trance, an abnormal state of wakefulness, existing spirits are appeased and encouraged to act supportively of the shaman's people. Further, the shaman manipulates wild magic through the altered states of consciousness induced by pain, fasting, herbs and extraordinary physical exertion, producing a natural degree of intoxication. The presence of the shaman adds +1 happiness to a community.

Animal sacrifices: promotes a stronger relationship with death and personal sacrifice, inspiring a culture of giving oneself for the good of the tribe.

Sacred journeys & Vision quests: these act as a means for the strongest to obtain status within the tribe, while expanding the tribes knowledge and preparedness for the outside world. The practice also inspires the creation of sacred places and monoliths.

Cairns & columns: these are unnatural piles, or stacks, of stones, serving as landmarks and guideposts. Diviners are sometimes able to communicate with spirits related to the cairn. 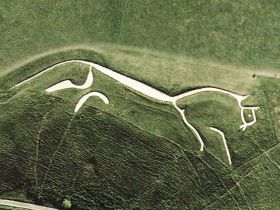 Geoglyphs: these are large designs or motives produced on the ground and formed of broken rocks or similarly durable material. These function as monoliths, but as they cannot be understood from the ground, they are comprehensible to only a small number of holy persons who understand their nature.

Groves & dales: these are naturally idyllic wilderness places existing as gathering places for benevolent spirits, able to heal and restore worthy persons to a state of health and life. Worthiness is determined by the manner in which the subject became infirmed, disfigured or killed.

Monoliths & megaliths: a humanoid-made monument in the form of tumulus, dolmens, barrows, mounds, kurgans and like structures, existing as markers, burial sites or features intended to channel magical energy. The presence of monoliths demonstrate a shared cosmology among primitive cultures. These places act as catalysts for empowerment, visions, self-awareness and direct communication with the cosmos. Their presence adds +1 culture. Megaliths are mindbogglingly immense monoliths, adding 1d6+2 culture; 1 in 100 monoliths will be a megalith. Monoliths and megaliths are commonly rock cuts.

Sacred places & iIsles: These are naturally occurring geographical features that lend focus to wild magic and other energy, increasing the effectiveness and power of spells, typically from 20-50%. Such places are typically marked by a monolith.

The basis of a primitive trade economy whereby more developed outsiders arrange to barter with well-placed yet isolated tribal-based settlements. An arrangement is often made in which the outsider leaves trade goods at a pre-arranged place, thereafter signalling with a gong or by smoke. The primitive culture examines the offer and deposits their own goods in exchange. The goods traded for are typically crude and for practical use. Continuous trade helps stabilize larger settlements into sustained villages enduring multiple generations.

Material status: certain clan or tribal members, deemed the bravest and those most worthy of leadership, enjoy the eminence of possessing metal weapons and jewelry, with the use of pottery vessels and other metal objects.

Trading site: a specific agreed-upon location usually coinciding with an unusual geographic feature such as a stone platform, high embankment or isolated tree or standing rock. A cairn or other minor construction may be present.

Village centre: a collection of long-established durable buildings organized around a village green and common water supply (natural spring, pond or river), with paths leading beyond. Settles 100-150 persons. Village centres are only present in settlements of 500 persons or more, with remaining population distributed among other village blocks.

Dugout & stone/clay housing: developed stone & clay roundhouses, dugouts and adobe structures built to last several generations with minimal repairs. Dwellings are small, typically 15-20 ft. in diameter at most, with 4 ft. doorways and capped ceilings, or dirt floors dug three feet below surface level. Use of clay is primitive and depends on dry climates to ensure durability; found only in village centres. Adds +1 health.

Market: select settlements have access to trading sites that add +1 wealth. This wealth is expressed in hard goods and not coinage.

The comprehension that all entities, living or dead, possess a spiritual essence which remains aware and conscious of the material world. The veneration of the dead celebrates the family lineage, so that the living are free to ask the spirits of the dead to intercede on their behalf. This is less a form of worship than a form of respect and appreciation emblematic of adoration or love.

Incense: increases the strength and ease with which spiritual revelation can be achieved.

Fetish: these are objects capable of influencing the actions of other creatures, allowing the transfer of consciousness and abilities back and forth between animals and the shaman.

Totem: an erected carved column that functions to increase good fortune while acting as a tribal standard.

Personal conviction: through contact with religious belief and observance, the personal search for self-discovery and spiritual revelation becomes common among the tribespeople.

Sacred leadership: the veneration of shamans produces a cultural awe for these individuals, acknowledging their wisdom, memory and good judgement with delirious trust. Shamans in turn withdraw from clan life, becoming meditative in their search for balance. These shamans become precursors to the druidic class (through contact with nature) or the bard class (from skill as storytellers).

Ancestral shrine: a family-oriented religious site, typically located upon the land of the most ancient or successful member of the family, consisting of a gallery of images and representations of the dead. The bodies of the dead, and tombs, are common forms of this representation. An outward enclosure is also common, with tended gardens above ground and a series of chambers below ground.

Incense groves: these are scrub and forest groves providing natural resins that may be bled out and harvested. May be exploited by up to two T(5-7) hexes per incense reference. Adds +1 wealth and +1 happiness for the nearest settlement hex.

Few animists exist among the population, the faith in ancestral spirits being superceded by the widespread faith in polytheism and meditation. For outsiders, animism becomes increasingly viewed as folklore, though it continues to form a background to social culture and as a part of other religions.

Tools: Fetish objects adopt a superstitious role, with many people carrying them but indifferent to their comparatively slight religious and magical potential.

Culture: Shamans, stripped of their social status, exist as rural hermits, maintaining their scant druidic or bardic knowledge but lacking the practical training that would enable them to become levelled as a class.