Griffons are beasts with the body, tail and back legs of a lion, and forelegs, head and wings of an eagle. The golden feathers of the beast's forepart overlay a soft coat of dark tawny brown hair that covers the creature's rear. The griffon's wingspan is magnificent and possesses enormous power, enabling the griffon to fly and dive much like an eagle, despite the shape of its body. Griffons originate in central Asia and hunt over a vast area stretching from the Gobi Desert to the savannas of East Africa. They are most commonly found in lands around the Aral and east Caspian Seas, and throughout eastern Persia. 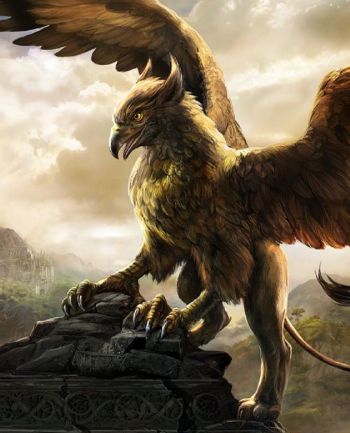 The griffon hunts much like an eagle, usually dwelling in high places providing the beast with the potential for seeing prey at a very long distance, even as far as two to three miles. A griffon will usually have two or three such places, choosing to rest in these places between long, passing flights in which they will make a circle as large as a mile in diameter. Near the focus of these places the griffon will build a nest; mating takes place in the late winter, usually before the vernal equinox. The female will lay two eggs and then set out to hunt, leaving the male to guard the next. When born, the young weigh 30-50 lbs., and are voracious enough to consume a live sheep, dog or similar-sized small mammal that is brought to them.

Griffons prefer domesticated animals as prey over those that are wild, especially ungulates, as these tend to have more meat on the hoof. They rarely hunt humanoids; but parties of the latter are often assembled to climb to the roosts of griffons to rid themselves of the beast's predation, which can cause the loss of 60 to 100 animals a year in an area encompassing hundreds of square miles.

The griffon is able to drop with startling speed, diving with extreme accuracy when striking at prey on the ground. When doing so, the griffon is +4 to hit; +6 if the target is surprised. Also when diving the damage done by the beast's claws is doubled, so that it is possible for a griffon to kill or seriously wound a large animal in this manner, ensuring that this prey can be carried easily back to the lair. Usually, when attacking small prey, typically anything less than 140 lbs., the griffon will purposefully use only one claw on the strike, so that the prey will still be alive when it is returned to the nest to be eaten by the griffon or its young.

Additionally, the claw's strength is such that creatures with less than 5 intelligence will surrender rather than fight their way out. Intelligent creatures are entitled to a strength check to break free (though this would likely mean a fall to the death), but the check is made with a penalty of +13 to the die. For example, a captured victim with a 17 strength would need to roll a 4 or less on a d20 to succeed in the check; those with a 13 or less strength would have no chance at all.

Griffons will engage in melee on the ground with an enemy, until they are stunned — whereupon they will take to the air. If the griffon succeeds in a hit with both its fore claws, it will then get two additional attacks, raking with its lion-like claws, each causing 3-12 damage.