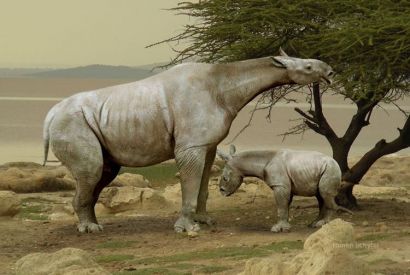 A species of hornless rhinocerous and one of the largest land mammals that has ever existed. The giant herbivore is almost incomprehensibly immense, the equal of four elephants in size. Because of its mass, it has few predators and a slow rate of reproduction. As a herbivore, it consumes deciduous trees, soft plants and shrubs. These are sometimes uprooted and crushed whole, within the baluchitherium's gigantic teeth, each the size of a human male's fist. The baluchitherium is indifferent to most that cross its path.

With a body length of 28–30 feet from front to back, with its belly hanging six feet above the ground. The great extended neck is between 7 and 8 feet long. Due to its size, the creature moves at a cost of only 1/2 action point per hex. The limbs are large and robust and will support the animal's weight, enabling it to lope at about 16 hexes per round once it reaches a full run, which it can maintain for more than an hour.

If two are encountered, they will always be a mated pair. If a third is indicated, this will be a young baluchitherium; young are born in the early spring, when snow is still on the ground. Baluchitherium will grow to full size by mid-autumn.

To maintain their body temperature, baluchitherium will forage at night, while immersing themselves in rivers, ponds or boggy tracts during the day. They are migratory, being constantly in search of food. These animals are few in number and are found along wooded river banks throughout the wide Asiatic Plain, from the Aral Sea to the western edges of the Gobi Desert. A large population are treated as sacred by the orcs of Orza-Ko, who view it as an act of evil to kill one a baluchitherium. There are perhaps no more than 650 that exist in the world.

Rumors that ogres have used baluchitherium as pack animals is unconfirmed.