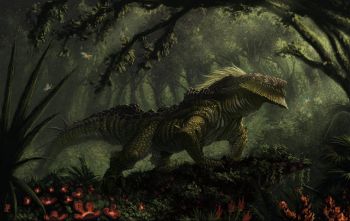 Reptilian in appearance, this six-legged creature is sometimes spontaneously born from the egg of a serpent or toad — though few know the reason why. The basilisk will never be far from cover or stone. If it is hurt it will seek to disappear into a hole and escape.

The basilisk is continuously on the hunt for meat and it delights in eggs. If allowed, the basilisk's tongue is able to lick the stoneform of its victims and restore parts to meat, so it can be consumed. Unusual eggs, like those of a reptile or immense bird, can be used to lure the creature into a trap; some zoophiles will keep a beast like this in an oubliette, casting victims into the pit as needed to keep the basilisk alive.

The basilisk's chief threat is a gaze that transforms enemies into stone. Once meeting and being surprised, or failing initiative, all creatures must roll a saving throw against the basilisk's gaze, or be turned to stone. Otherwise, it is presumed the creature has had time to look away and a saving throw is not needed. That said, any attack on the beast with eyes open will, again, require the saving throw. This is true of every sighted attack that is attempted. A combatant may attempt to fight the beast with eyes closed, but if stunned, a saving throw must be made to see if the hapless defender has opened their eyes at a wrong moment! The only safe way to fight a basilisk is to retreat, tie a blindfold over one's eyes and fight the creature that way. This takes time, however, and the basilisk isn't always willing to wait.

Fighting the creature blind gives a penalty of -8 to hit. The basilisk knows to make little sound and it may conceal itself among stones or beneath undergrowth, so as to be less detectable as it attacks. It will move around to attack from the flank or the rear as well, if it can.

Though believed by many to be true, the glance of a basilisk cannot be redirected by a mirror, causing the basilisk to turn itself to stone. It is true, however, that the basilisk may be observed safely through a mirror. Characters with trick-shooting ability may fight the basilisk this way with relative safety.