The elk, or wapiti, is one of the largest species of the deer family. It should not be confused with the still larger moose, which is called an elk in Europe. It ranges in forests and areas adjacent to forests, along wooded river banks in steppelands and along the treeline in high country. Males have large antlers which are shed each year. During rut they are very dangerous and prone to attack, as during this time their mating rituals include posturing and antler wrestling, or sparring. They also make loud noises at this time (typically November) to proclaim dominance over other males and to attract females. 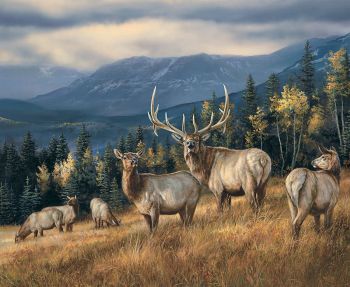 Populations are present in both northern America and Eurasia and are common. Harems of females may be quite large, but they are mated with only by dominant bulls. In any group there are typically 3-6 secondary bulls, who will move alone separate from the main herd; a dominant bull; and the remaining number being females. The dominant bull remains near to the females and will behave aggressively if the females are approached.

Elk attack by hooking with one horn, then driving on with both; the dominant horn causes more damage than the other. The charge of the elk can be devastating and will cause double damage with its horns when each hits (a natural 20 will adjust this to triple).