Bulettes are massive, dangerous beasts, possessing immense strength and power in their limbs and bodies. They're able to cause tremendous damage when attacking, in addition to incidental damage. They prefer warm climates and open ranges with soft, rich soil into which they can burrow. They're also able to swim, but enter the water only to cross river barriers. 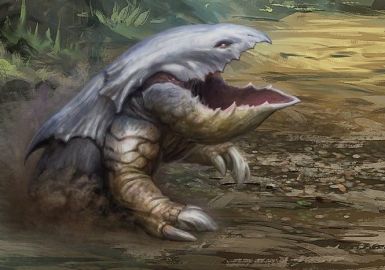 They have been known to wander hundreds of miles over the space of a few weeks. Though they are described as able to leap upwards through the ground, there is no truth in these myths — therefore the appellation of these creatures as "land sharks" is a misnomer. Trees form a part of their diet, but these creatures also feed on large mammalian flesh and bones. When hunting for meat, it prefers large, heavy creatures such as elephants, rhinoceroses and crocodiles. They've been known to eat humanoids, but it's not generally their nature.

The bulette's mandibles form an enormous maw with five to seven ridges of razor-sharp bone, two inches long; when the creature bites, it causes a tremendous amount of damage, making it able to bite a human in half. The beast's four pillar-like legs connect to the bulette's shoulders with highly flexible ball-joints. The legs end in long claws that are able to gouge and rend flesh. Despite the bulette's size, these feet are agile and quick; the beast attacks by rearing up on its hind legs while slashing with its forefeet and mandibles.

If the bulette is stunned, then at it's next opportunity the bulette will perform a violent, , whirling spinning kick with all four feet — striking first at whomever succeeded in stunning the beast last. The bulette then ends this turn with a bite of its mandibles, thus getting five attacks in a single round.

This attack is so formidable that most creatures let the bulette go its way unhindered.