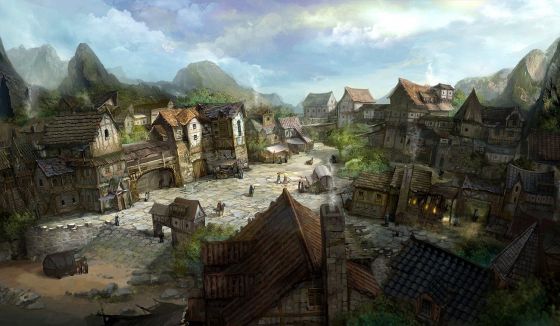 A country town, progressing from its core village towards the accumulation of larger, abutting structures; soon after will come the need for security and a town wall

Towns are conglomerations of settlements and villages that have grown and gathered together for the purpose, first, of protection, and second, for economic regions. A small town of a few thousand people may be distinguished from a large village not only by its size, but through the citizens having the means, and the will, to build a permanent structure around their habitat for the sake of security. Until this is in place, the need for protection rises above every other concern; and once the town is transformed into a safe haven, economic interests are sure to take hold, eclipsing every local sentiment that a villager would possess.

Townspeople are less concerned with the seasonal drama of the soil and growing things. Nature finds ways to assail the inhabitants, but they are free from nature's tyranny. It is life conducted with the aid of permanent shelters for protection and storage, reliable companionship with others, the constant reassurance of religion and state. Towns are concerned with the remaking of raw materials into instruments of urban living, by means of which money is made, which is spent upon the comfort, art and wisdom of the individual's daily materialistic routine. Unlike the village, every day is not the same; the deeply rutted ways of the village are abandoned; all is bustle, rush, the arrivals of ships and caravans — and the appearance of new things.

Yet a town is not a city; its main energies are yet consumed with the marketplace, with gathering things from the outside, with storing and making and shipping forward. Business is not yet transformed into finance; fabrication falls far short of creation. Occupation is a dim substitute for society, culture, heritage, learning and creativity. The town has grown beyond the village, but it has not yet matured; it does not yet possess wisdom.

The Growth of Towns

Up until the Norse invasions, the monastery served as a secure haven. Communication was carried out between monasteries and regional lords, while backward villagers dwelt in the monastery's shadow. From the monasteries came alms, and news of the outside, and opportunities for selling some small part of one's agricultural goods. Within monasteries, the arts of bookbinding, glass making and decoration were carried on, none of which crept into the lower villages, who were many times removed from the lives of monks.

Markets arose because they served the feudal lord or the monk. Providing a market for goods, and a mint to stamp coins, enabled the collection of goods and taxes. This formed a new urban foundation. Market privileges were granted to persons able to pay for them — most often religious persons. Villages with the "market cross" became points on a network of trade; traders became a new class, who gained special privileges through new laws. Villages permitted to sell gathered converts; trading villages collected vassal subordinate hamlets, that grew themselves on the fat that fell from the village's table. An increase in population and wealth, particularly in villages that acted as stepping stones along the most important routes from China to Europe, laid the foundation for international capitalism. Walls rose around conglomerations of people and select orchards, vinyards and water sources, separating towns from the country. In these places, producers count for 80% of the population. The remaining income is enjoyed by those who "hold" buildings and land in exchange for cash rent. By the 14th century, with exceptions, feudal lords and nobles had supplanted the monasteries, outnumbering them in the desire to create urban centers that would raise taxes for the equipping of soldiers and ships.

Approaching a town, the players meet with signs of commerce outside the walls, where imported goods await purchase or process. Pens containing animals, along with laden carts and wagons, unhitched. These bear lumber, stone or thatch, gravel, ore, manure ... anything that can bear up in weather without protection. A roadhouse — a sprawling one-story tavern and inn — sits on each side of the road, beckoning travellers.

The town gate is open and encouraging; the fee to enter is very low, one or two copper pieces, to encourage peasants to enter with raw materials to sell. The number of entrants per day is few, just fifty or sixty; the town isn't so large that problems of social decay can't be cleaned up nightly, as those without a place to sleep are "swept up," beaten and turned outside the walls by brute squads, the rough gangs of the town watch.

There are few places inside the walls; there may be only one very expensive inn within the walls, much costlier than the roadhouses outside. Visitors are traders and agents from far away, not casual travellers. There is little crime; the money exists for rebuilding and expansion, so that burnt-out buildings are quickly cleared away and new buildings are everywhere. Violence is largely political; vice is organized, taxed and assigned to specific lanes and streets. The people themselves are friendly and helpful, particularly to a stranger's money. Strangers will be warned at twilight that it's better if they get out before dark, and why they should. Those with money are welcome to settle.

Adventures do not fall into the typical tropes; townspeople do not care about bandits, as they themselves do not ship goods. They buy and sell, they do not carry. They don't care about infestations or raids that go on outside the town walls; what do they care about the sufferings of peasants, or the problems that face travellers? They care about the acquisition of raw goods: and they will pay quickly and happily for whatever arrives. What they cannot use, they will sell to others who will carry it onward. A trader will happily tell a party what they want, where to get it and how to get there, providing maps if need be, to places across the continent or the world — and will be generous if the party arrives with the luxury, gemstone, spice, rare cloth, incense or precious metal asked for. How it is brought back is the party's problem, and of course smuggling it across borders will increase the party's profit.

Too, a trader will pay a party to raid a competitor, particularly in another city; they will pay for burglars, or help fund the party as pirates, waging war on some other trading faction. Once a party has gained the trust of a powerful merchant-prince, they may find themselves outfitted, with soldiers, ships and funds, to plunder a heathen city — this is how Constantinople fell. Of course, the party must show they can be trusted before such an outlay is possible. Morality, doing right, none of that means anything; it is how much money one can gather and what throats need to be cut to accomplish it. Outsiders' throats, obviously.

If a town is less than 200 years old, it should be considered a "country town," without walls.

If a city is less than 75 years old, it should be considered an "open city," without walls.