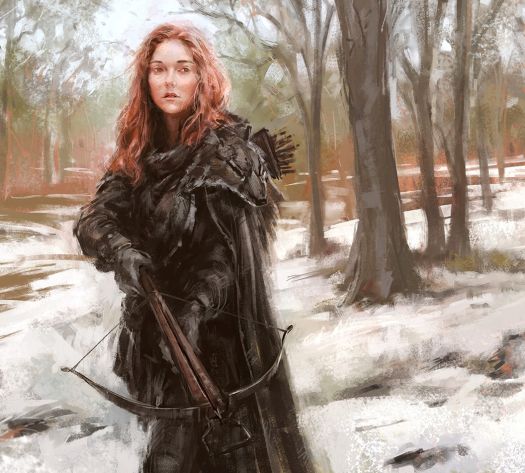 The crossbow, distinctly the light crossbow and the heavy crossbow, is a missile weapon used in combat, consisting of a stock, trigger mechanism, flight groove, flexible horizontal "limbs" similar to the ends of a bow and a bowstring. Light crossbows include a cocking stirrup for loading, while heavy crossbows have a crank that's built into the stock. The weapon fires wooden bolts that are untipped, stabilized by small wooden flanges. Crossbows are made by a bowyer just as bows are. The maker of bolts is a "fletcher."

Crossbows consist of a shortened bow mounted on an enlongated frame, with a built-in trigger lock that holds the drawn bow string, until the trigger on the underside of the stock is pulled. This mechanism permits the crossbow to be kept "loaded" for short periods, so that combatants can easily hold it pointed towards an enemy about to emerge.

The time before the string must be released or eased, which consists of gently loosening the string without firing, is 10 combat rounds. Since an archer usually has to spend a round loading before firing, because the tension on the string cannot be physically maintained, the crossbow offers a large advantage. However, the time needed to load a crossbow is a definite disadvantage.

For game purposes, light and heavy crossbows fire the same bolts. Fired bolts may be recovered if the intended target is missed and a saving throw for thick wood against "crushing blow" is successful (10). It may be deduced in the outdoors or in some subterranean settings that some "broken" bolts have landed somewhere they cannot be found.

The bowstring is made predominantly of animal sinew, though linen, hemp, silk and rawhide are twisted into the string for durability. After several minutes submerged in water, or if it has been allowed to stretch too long, sinew is of little use. It's good to have a number of bowstrings on hand, as they can easily break.

If a roll to hit produces a fumble, the first break roll is applied to the bowstring — strings will break on a roll of 1 in 4. If the string breaks, the character must roll a d12; on a 1, the crossbow itself breaks as well.

To load a light crossbow and aim requires 2 full rounds, plus 2 action points (AP) to fire in the third round. The heavy crossbow differs in that it requires 3 full rounds. With the light crossbow, the combatant must put his or her foot into the cocking stirrup and wrench upwards on the bowstring with both hands to fit it into the trigger lock. The heavy crossbow permits the latter action to be performed by a crank with two handles. In either case, the combatant must be standing and must maintain pressure with both hands until the loading is completed — or else it must be started again from scratch.

The operation can be performed by anyone, regardless of their possession of a weapon proficiency in crossbow. Therefore, a soldier may have one or two servants available for loading one or more crossbows, locking the trigger before handing each over to be fired.

Crossbows can be fired from horseback by combatants possessing a horse archer or camel archer skill. However, crossbows cannot be loaded while mounted on a horse. The howdah of an elephant or an oliphant does offer enough room to load a crossbow while standing on the animal's back.

Unloading a crossbow from a brace on the character's back and getting it ready for combat — including loosing the cap on the quiver holding the bolts, requires 6 AP, which may be spread over multiple rounds.

Restoring a crossbow to the brace on a character's back requires aid from a second person. The time needed is 4 AP.

Stringing a crossbow requires 3 AP, assuming both string and bow are already in hand.

The crossbow is a hereditary weapon for characters raised in Castile & Leon, Genoa and the lands of Morocco. It is a favoured weapon of artillerists, bounty hunters, marshals and tavern keepers. This grants a +1 bonus to hit for these peoples.

Handheld crossbows small enough to be fired like a pistol don't exist in Alexis' game world.