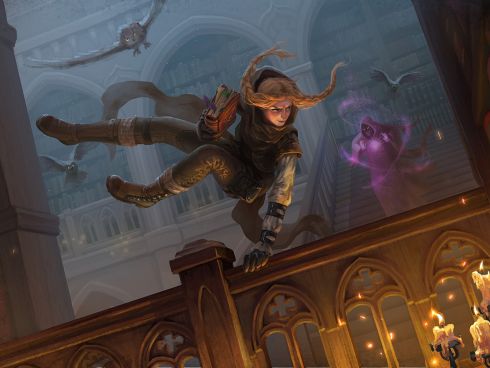 Definitely an ability check when she lands.

To determine the success at various actions associated with the abilities of a player - strength, intelligence, widsom and so on - a d20 is rolled against that player's ability stat. Rolling equal to or less than the ability will produce success.

Ability checks are described using the type of check that it is: a "strength check" or an "intelligence check."

Checks are ALWAYS made against the character’s stat as it is in the present.

It is never necessary for a player to make an ability check when, given the character’s ability, success may be taken as a given. For example, it is assumed that a character with a dexterity of more than 12 can be expected to catch an item tossed from ten feet away without the need to make a check in any circumstances. Characters with an 9 to 11 dexterity most likely would, except in situations of stress. Characters with 8 or less dexterity ought to make a check whenever success matters.

Extraordinarily difficult actions can be handled by employing multiple checks, often of more than one ability. For example, a character attempting to jump a ten foot distance onto an opposing roof with little running room would first make a strength check to see if they were able to clear the distance; then a dexterity check to see if they successfully gained a foothold on the sloped roof.

In all such cases, the DM should make clear before the jump is attempted whether the initial strength check’s failure will enable additional saving checks or if the initial failure will mean a fall. Complete transparency on these matters is necessary. The DM (or the player) should not be able to make up new checks in order to compensate for previous ability check failures. Ability checks should matter!