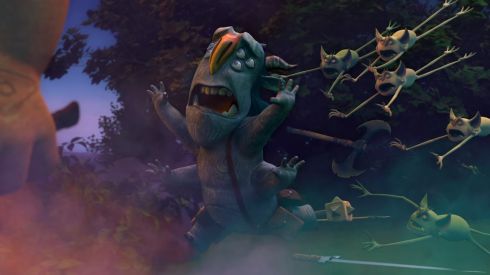 Terrifies creatures in the area of effect, requiring the affected to make saving throw against magic or else flee in panic. This flight will always be directly from the caster for the duration of the spell. Affected characters move at maximum stride as they flee.

Once the duration has passed, or if fleeing creatures are arrested in their flight, they will regain their sensibilities and recognize the effects of the spell. However, before they can re-engage in combat, they must make a successful morale check; this check may be made each round until a successful roll.

If for some reason a creature cannot run away, because their passage is blocked by a wall, a door that cannot be opened, a dangerous fall or because the only way out is in the direction towards the caster, those affected will huddle, tremble or otherwise seek their best possible refuge. They will typically bunch together and remain trembling for the duration of the spell. If attacked when thus cornered, they'll attempt to surrender willingly rather than fight. However, if forced to defend themselves, they will with a penalty of -3 to hit while continuing to beg for mercy for the duration of the spell. Afterward, the -3 penalty to hit will endure until a morale check is made.