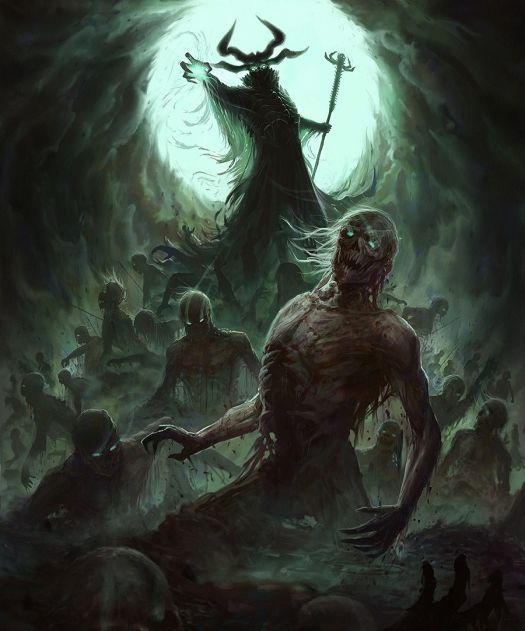 The undead are the corpses of beings with souls reanimated by curse, affliction or supernatural forces into a "negative" force that continues to exist outside of natural law. With the change comes a persistence that enables the undead to continue for age after age, infecting new victims and multiplying their evil in the world.

In most cases, victims who die under the hand or influence of the undead become undead themselves, to prey on others in their turn. The experience is like being in a trance; all they knew of their old life is gone, replaced by forces of occult — unknown horrors that take place in the fissures of the earth, impossible to apprehend through science and logic.

When the body of an undead creature is destroyed — and often, this requires complex and difficult to employ means — the soul of the original victim is released and finally able to rest. The undead becomes "true dead," unable to rise again.

As the forms and types of undead range from somewhat fragile, weak creatures to those of enormous power, the kind of behaviour to be expected from each varies widely. More intelligent undead carefully indulge in the practice of infecting new victims to expand their authority, or seeking power directly through immortality and influence.

Lesser undead mindlessly seek to hate and kill all victims who fall in their reach, without consciousness of their own evil. These last tend to remain in the places where they were first formed, trapping interlopers and expanding their territory only after their numbers increase prodigiously. There are very few historical recountings of undead armies on the move, consuming village after village, because of the unrestrained motivation of the living to wage all out war on such events, putting all other matters aside until peace and reason is restored.

Most undead are only able to move after sundown, though skeletons and zombies are an exception.

The undead radiate an intense form of evil, producing unholy places able to defy spells such as protection from malevolence, dispel magic, chant, prayer or bless. The area of such places depends on the number of trapped souls — undead and victims of humanoid sacrifice — that have been bound to that place. For every score of bound souls, or 20 in number, four combat hexes within the lair or sanctuary of the undead will be protected from all magic designed to protect against evil.

All undead are immune to sleep, charm and curses; the undead never rest or slumber, though some that must hide from sunlight may be surprised in their refuges during the day. They cannot be stunned, either by the result of damage done or sage abilities available to monks and others.

Many spells that might affect other creatures that require the spellcaster to touch the victim, such as shocking grasp, lay the caster open to suffering from an undead's natural attack form, when that undead also attacks through touch.

All forms of undead suffer from the touch of holy water, as though the substance were acid against their skin. A single vial of 4 fluid ounces can cause 2-8 damage on a splash. This is managed by hurling the contents of an open vial at the undead and hitting armour class 10, regardless of the undead's physical nature. Misses always cause at least 0-2 damage, as some flecks of water are bound to land true even if most of the splash misses.

Holy water sprinklers are designed with a glass bladder containing holy water, that explodes when hitting a corporeal undead creature. These weapons cause 3-12 damage from the splash when the weapon hits, but can only benefit from this effect once, until a new bladder is emplaced in the weapon.

The following creatures may be counted as undead: