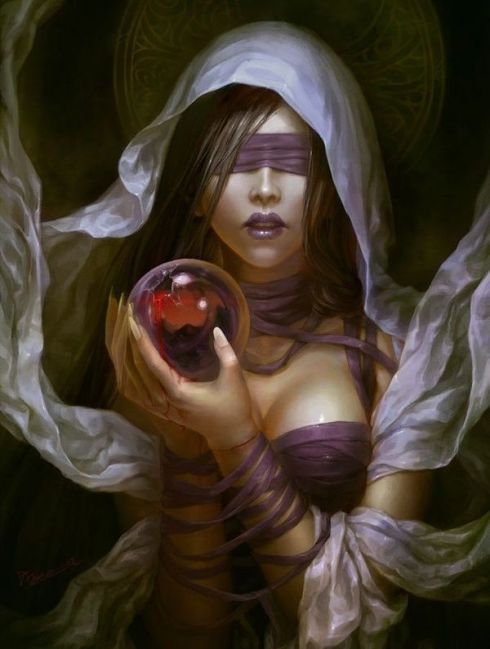 Blindness describes the complete physical lack of light perception, a circumstance resulting from magical or chemical inducement, injury to the eyes, a bestowed curse or the result of disease. Characters plunged into complete darkness are also blind, though this is an outward effect.

Usually, blindness is overcome over time, with the spell cure blindness (which can also cause blindness) or through the use of restoration. Curses, on the other hand, must be removed through making amends, though sometimes a remove curse will suffice. However, circumstances could arise that makes it impossible to obtain these remedies, so that a character might have to live with being blind for months. Nonetheless, it is possible for a character to be effective, despite his or her blindness, and some players may even want to run a character of this kind.

Initially, those struck blind or plunged into darkness are severely disabled. In battle, they suffer a -8 penalty to hit, and naturally they are limited in a hundred ways with regards to locating themselves, recognising associates or even managing to dress and eat when they cannot see. Usually, in the first few weeks, blind characters must be assigned a "helper" who arranges their clothes and assists in feeding. It's probable that a blind adventurer would need to hire an attendant full-time, since orienting oneself in strange places and with meeting new people offers many challenges.

Within two months, however, the blind person can be taught how to eat and dress, or can adopt strategies for getting about with the help of a guide. A blind druid could rely upon animal friends, while other characters may be able to similarly gain the same benefit from the druid in the party. With each month of blindness, the character gains benefits from his or her other senses, reducing the character's to hit penalty by 1 pt. When the penalty is reduced to -4, it improves no further.

Heightened senses is a sage study that improves the character's degree of awareness regarding the location and approach of others, as well as potentially improving the character's working senses. Though easily available to assassins and thieves, a blind character could improve themselves with ongoing instruction to gain one or more sage abilities, whatever the blind character's class might be. With patience and commitment, an illusionist or mage could target area spells, while a fighter could be effective with a combination of levels and puissance.

It's up to the character to problem-solve the difficulties of blindness by enabling certain skills. On some level, the character would never be as effective as a sighted version of themselves, but there are other things to consideration.

Blind characters would gain a tremendous advantage over opponents that were suddenly made blind, or were plunged into inky blackness. A blind spellcaster would do well to concentrate on spells that obscure vision, such as darkness and fog cloud. While many characters benefit from infravision and ultravision underground, tactics that circumvented these advantages could be employed. The limitations of night have no effect on a blind character's abilities.

Additionally, others who could see the character's blindness would very likely underestimate the character. The character could play to this by wearing cloth over his or her eyes, or allowing others to see the ravaged loss of the character's eyes. Sympathy and a willingness to listen could also be counted upon. And then if the blind character turned and struck an opponent, the chances of surprise would be raised from the usual to 3 in 6, certainly.

Other possibilities remain to be discovered by the character, through play. Obviously, the DM must be open to the player's inventiveness, within reason.