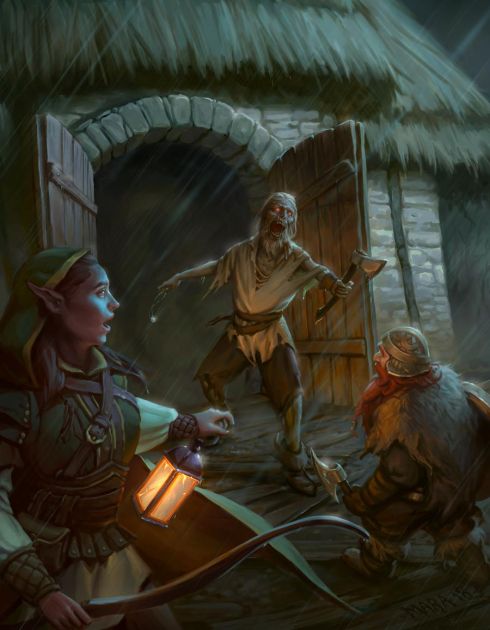 Surprise is a circumstance that might occur between parties at the moment of contacting one another, indicating the possibility that one or both parties might be taken aback by the unexpected occurrence. Combatants that are surprised are effectively stunned and unable to take action until the surprise has passed. When a party "achieves surprise," it means that the party not surprised is in a position to take advantage of their surprised opponents.

When one party is surprised and the other is not, then surprise supplants the need to roll initiative. When both parties are surprised, no one is able to take action immediately and initiative must be rolled to see which party recovers from surprise first.

Surprise occurs when there is a legitimate chance for individuals to be taken unawares. This most commonly occurs when a party has not seen or heard others, and therefore has no foreknowledge of the other's presence. Being ambushed (particularly when the party feels safe), moving around a corner without carefully looking first, rushing through a door and the distraction of making or breaking camp; conversing with others so than enemies may approach unheard; being in a state of wearyness, drunkedness or sleep; and expecting one thing and getting another.

In the case of the latter, surprise might occur when the party has determined the presence of orcs beyond a door. Feeling certain of this, they kick the door open — only to find that the orcs include a large, unexpected ogre. Naturally, this would be a time to roll surprise. On the other hand, if there were only orcs, then the party would not roll surprise upon kicking in the door — though the orcs would.

Once it has been determined that surprise might occur, each party potentially affected rolls a d6. The DM randomly designates a person to roll for the player character's party, NPCs included, while the DM rolls for all others. Surprise occurs with a 1-2 chance in 6. Each roll applies to all the individuals upon each side of a conflict. Individuals may, however, adjust the die roll in their favour.

For example, the player party's die roll is a "2," indicating the party is surprised. However, as the surprise occurs in the wilderness, the ranger in the party is not surprised, because in that environment a ranger can be surprised only on a 1. Therefore, while the rest of the party would be unable to act, the ranger would be able to roll initiative against an unsurprised enemy, or take advantage of the enemy's surprise. Assassins, monks and thieves also have circumstances during which they are resistant to surprise.

Some races and monsters, such as elves or lynx, and rangers too, are able to move so quietly that they are better able to surprise than ordinary. The chance for these creatures to surprise will be written as, "surprise on a 1-4," which indicates that any party rolling against these creatures will be surprised if the result is a 4 or less. This special attack will apply to everyone, though assassins, monks, rangers and thieves (when it applies) will gain a +1 bonus against being surprised by such creatures.

Dexterity grants no bonuses to the determination of surprise as it does for initiative.

On guard is an ability that allows fighters, paladins and rangers to remain cognizant of their surroundings, so that they will not be required to roll surprise when encountering an enemy.

Additionally, for any intelligent being, if there is good reason to believe than an enemy is nearby and will probably attack, and the party takes all proper precautions, then there should be no reason for the party to roll to see if they are surprised. The DM should be reasonable in such matters. Obviously, a party cannot always be "ready;" but there are times when they are consciously taking no other action except to be ready.