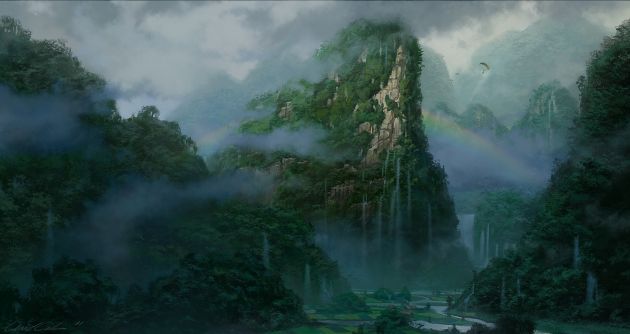 Jungle, also sometimes described as tropical rainforest, describes an area of forest vegetation with a dense and tangled undergrowth that is impassable without cutting. Jungles are distince from sub-tropical rainforest, in that the understory of the latter is typically open of vegetation, and relatively easy to traverse. Jungles form in low-lying areas with many streams, which enable light to reach the ground, spawning undergrowth, and upon the margins of rainforests, once again due to the greater available light at ground level.

Jungles are among the most inaccessible places on earth, with extensive parts that are untamed and isolated from civilisation. These regions experience no dry season, so that all months of the year receive a monthly rainfall of at least 4 in., and usually much more. The jungle floor consists of decaying plant and animal matter and is overrun with insects. Vast areas consist of waterlogged lowlands, or flooded forests, with the water table just inches below the surface or inundating the land, such as with mangrove swamps, which occur alongside saltwater coastlines. In high altitudes, cloud forests are characterized by persistent, frequent or seasonal low-cloud cover.

In localized areas, typically with access to the water, indigenous peoples live as hunter-gatherers, trading high-value forest products such as hides, feathers, honey and hardwoods. Agriculturalists depend upon slash-and-burn techniques, or shifting cultivation, in order to temporarily provide soils that will grow crops. Many plantation crops have been transplanted from naturally growing jungle plants, such as yams, coffee, chocolate, bananas, mangoes, papayas, macadamia, avocado and sugarcane.

Travellers grope slowly through jungles at reduced speeds, without visual contact of their surroundings, causing disorientation. Oppressive heat and humidity prevail there during daylight hours, but penetrating cold can set in after dark at high altitudes. An inch of rain can fall in 5 minutes, which will turn the jungle floor into noxious mush. Wet vegetation muffles sound, so that even large beasts can approach to close distances easily. Neophytes grow restless amidst the constant chatter and noise, especially at night.

Maps are virtually useless, and the jungle reclaims open areas, trails and even whole villages or ruins that have been abandoned. Overland travel averages about ½ mile an hour where the going is good and ½ mile a day where it is not. Travellers are subject to disease and fungal infections called "jungle rot," body rashes from profuse perspiration and heat exhaustion. Tropical maladies include dengue fever, scrub typhus, malaria, typhoid, cholera, hepatitus, diarrhea, dysentery and allergic reactions to insect bites. Blood-sucking leeches are plentiful. Clean water is impossible to find.

Below is a list of the most extensive jungles in the world:

Jungle is often a featureless expanse, with little change from place to place. However, below is a list of elements and features that occasionally occur in jungle ranges:

The following monsters are common to jungle ranges: