These terrifying, immense frogs are known to inhabit jungle and deciduous forests from central and southern India to southern China and Japan, as well as being known throughout Indochina and the East Indies. They possess claws upon their feet, making it possible for them to burrow into soft earth, which they will do with great alacrity. They have been known to create extensive underground tunnels, up to ten feet in diameter, in Burma, Kampuchea and in northern Borneo. They do not possess the long tongues that their smaller cousins have. 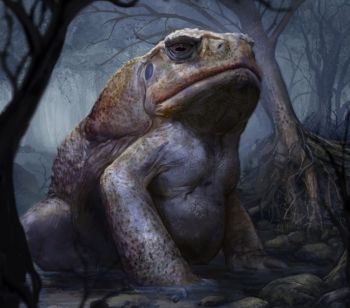 Giant frogs have leathery bodies and large muscular arms. When they attack, they will swing only one claw against enemies — but either claw might be used in a given round. As nocturnal meat-eaters, they possess and extremely good night-vision and are a terror in forested regions at night. They will often partly bury themselves in soft loam, laying in wait and attacking prey as it passes. They rarely hunt prey.

In combat, the first time it is struck (whether or not it is stunned), the giant frog will produce an ear-splitting croak. This will stun-lock all creatures within four combat hexes of the brobdingnagian monster for one round; those who then do not make a save vs. paralysation will be deafened for 2–8 rounds thereafter, during which time they will be -2 in all their attacks (both to hit and damage). Each giant frog is able to produce this croak but once per day.

The giant frog is able to move well and swing its mouth and claw, but it is most dangerous for its ability to hop a distance of 25 feet, or five combat hexes. It requires 1 action point (AP) to do this, and the frog can expend an AP at any time to hop. The giant frog will not hop away from a fight or retreat at all, but will always fight to the death. It can attack enemies in mid-hop if it uses its first AP.