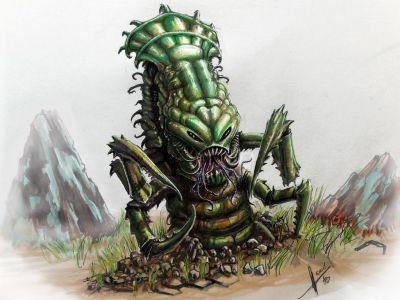 Ankhegs are meat-eaters that bury themselves into the soft, peat and cellulose forest floor, awaiting sufficiently-sized prey to pass by. The ankheg will then burst forth, striking for the nearest target, to seize the creature in its pincers. If the ankheg's to hit roll is 5 above that which is needed, the creature has successfully grabbed its victim. The victim will be helpless to escape the ankheg's jaws, unless possessing a strength of 19 or greater. The ankheg can burrow through soft earth at a cost of 3 action points (AP) per combat hex.

Having seized its prey, the next round the ankheg will back away at half its movement rate (4 hexes), to escape any threat. It will crush its prey between its pincers for 2–12 damage and simultaneously spray the victim with acid for 4–32 additional damage. The victim's equipment must also make save vs. this acid. The ankheg can squirt acid only once per day. The ankheg will continue to back away at 4 hexes per round, until the victim is unconscious or dead, or it is no longer threatened. Whereupon, the ankheg will flee to at least 30 hexes distant, until it senses it is safe.

At this point, the ankheg will drop its prey and begin to devour it. During the month of December, the ankheg may seek to bury the victim in the earth, so that it can be injected with about thirty eggs. The ankheg will then move on to seek other food. The eggs will hatch in 3–4 weeks, devouring the victim and growing into 3 hit dice ankhegs.

If two are encountered together, they will be buried 13–20 hexes apart.