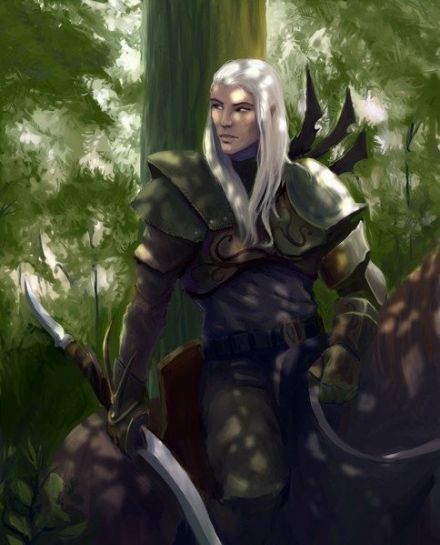 Born of either a human mother and elvish father or the reverse, these peoples are most likely to dwell in the culture possessed by their mother (as determined by their place of birth). Elves are not able to breed with other humanoids beyond humans. Contrary to popular belief, there are no sustained half-elven cultures; this is because the mother’s race will prove to be dominant after the first generation, so that the offspring of a half-elf will be either human or elf, with mere peripheral characteristics of the human or elven grandfather.

In the case of two half-elves, where one has an elven mother and the other a human mother, the offspring’s grandmother’s race, through the matrilineal line, will establish itself as the child’s birth race. For example, the half-elf Gareth (human father, elven mother) has offspring with the half-elf Miri (elven father, human mother); in such a case, the offspring would be human.

Both humans and elves will almost always embrace the offspring as a member of their own natural race. As well, racist abuse of half-elves is rare, since both humans and elves know the consequences will ultimately restore a true-blood offspring in due course. This is true even if the half-elf breeds with yet another race (which is possible). The mother of that race, or the half-elf’s mother (if the half-elf is the female), will always prove to be the dominant race of the offspring.

A half-elf combines characteristics from both races, with a lean build, while being somewhat thicker around the shoulders and waist. Males have an average height of 5 ft. 3 in. to 5 ft. 9 in., with females being about four inches shorter overall. Males typically weigh about 120 to 140 lbs., while females weigh between 90 and 110. They possess very slightly pointed ears and a face that’s a bit sharp for a human.

Other characteristics tend to be elvish, with fine hair that varies from ginger to black, platinum blonde to wheaten blond, and silver grey. Their beards tend to approximate humans. Their eye colour is usually a wide range of the colour blue, but the most charismatic may have eyes that are ultramarine and even violet in colour. Their skin colour is pale nordic.

Player characters choosing this race gain a +1 dexterity and a -1 constitution.

Half-elves have a wide range of classes available to them, including assassins, bards, clerics, druids, fighters, mages, rangers and thieves. Their presence of mind permits a +1 saving throw against charm spells for every 4 points of intelligence. A half-elf with an intelligence of 15 would have a +3 saving throw.

Half-elves should specify if their character would prefer to be usually capable with either a bow or a sword. Whichever the player chooses, the half-elf character will have a +1 bonus to hit with that weapon (but not both).

Half-elves also possess infravision, being able to see in the dark with relative clarity.