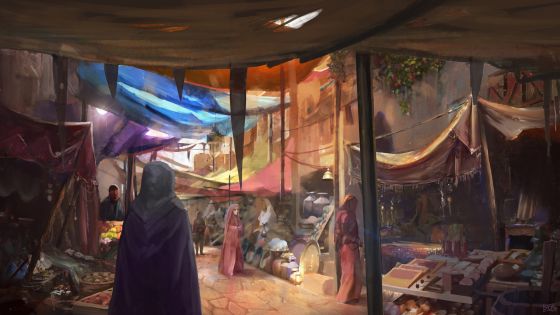 Markets are villages, towns and cities in the game world that set the market price of goods and services locally. All prices are calculated through a trade system that assigns regional production to specific Markets, that in turn send their production to other Markets. The space between markets, measured in days rather than linear distances, is used to calculate how much any given market is influenced by the availability set by other markets. Supply and demand is not measured, since the ebb and flux of prices was minimal in pre-industrial trade, and because the actual knowledge of how much supply is not needed to run a fantasy role-playing game.

Since a market imports goods (without concerning ourselves with how much) from multiple locations, the prices set are treated as stable. Drastic changes in price over short distances occur when one market produces a good or service not produced anywhere else in the region, but can be bought cheap in the market of origin. For example, caviar that is packaged in Astrakhan is made only locally; there is no other source for caviar anywhere in the game world. Therefore, caviar is cheap in Astrakhan; the further away from Astrakhan that the buyer travels, the greater the increase in price.

For characters who wish to buy cheap and sell dear, there are rules that limit the easy sale of goods in a region unless the character has experience in bartering or is part of a guild. Even then, there is always competition; the players will not be the only persons to think of going to Astrakhan and buying as much caviar as they can, to sell it elsewhere. Virtually all the bulk caviar sold in Astrakhan will be earmarked to preferred buyers, freezing out others who wish to invest. Players must be clever if they wish to break into a tight market and become traders.

For the most part, the cost of common goods like grains, timber, iron, pottery and so on will remain fairly consistent from location to location, though some adjustment in price will be noticed. Europe represents the lion's share of industry and production; movement away from Europe will see prices for high-quality manufactures increase until these things become unavailable. Other raw goods, however, such as spices, tropical foodstuffs, incense, pearls or precious gems, can be found more cheaply in markets far from Europe. There are over 800 different resources, services and products represented in markets; and there are more than a thousand markets in the game world that have been identified, in areas of the world that have been mapped. There are vast parts of the world that have not been mapped yet, along with types of products that have not yet been added to the general system. As these parts are added to the world, and to the system, prices rise or fall, depending on how each new place affects the previous balance of prices represented in local markets.