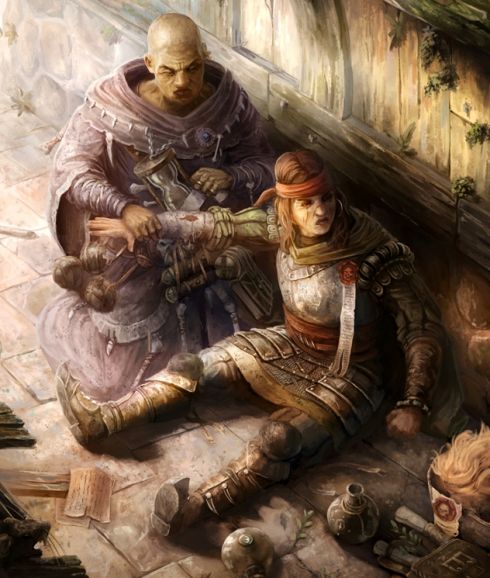 Injuries are physical traumas that surpass the ordinary loss of hit points. Caused by accidents, falls and unusually heavy blows in combat, an injury indicates that the character is seriously hurt. The result accounts for broken bones and bone fractures, ligament and tendon injuries, organ failures, amputation, dismemberment, lung scarring and effects from disease or poison, among other things. The injury rule encapsulates traumas to the body that would take much longer to heal than ordinary hit points.

For example, Caleb the Druid falls 30 feet and suffers 25 damage reducing him from his normal 23 maximum to -2 hit points. In addition, he receives 3 injury points. With so many possible ways to receive an injuries, and possible injuries that might result, it's recommended that the DM assign a credible injury in these situations, rather than imposing a random injury chart. A standardised chart is likely to produce irreconciliable results too often to be really useful.

Characters who are suffering from an injury are appropriately limited by that injury. A character with a broken leg cannot get up and move around. Characters who have recieved internal damage must be careful not to promote internal bleeding. Torn ligaments and tendons will hamper the ability to move easily or take actions. For each point of injury suffered, the character also receives a -1 penalty against their total action points.

Injuries can be healed in the same way as hit points, except that it requires 10 points of healing before the point is removed. Moreover, all injury points must be healed first before other healing can take place.

In the example above with Caleb, he would need 30 points of healing to remove his 3 points of injury. During that time, he would remain at -2 hit points — meaning that, with the rules surrounding negative hit points, his ability stats would be penalised by 20%. When Caleb's injuries are healed, he may begin to restore hit points normally.