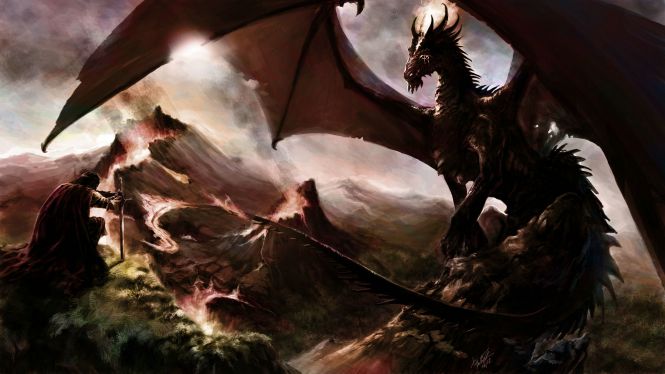 Dragons are enormous, highly dangerous intelligent creatures who view the world with either caution or contempt. Morally, they hold themselves to be loftier than the common beings within whose world they inhabit; they loathe to intervene, but will take actions when warranted and when practicality allows.

Every dragon understands first and foremost that they are mortal; they are not gods. Dragon folklore tells many tales of dragons who sought to intercede in the humanoid events and activities, only to have things turn awry, orchestrating the dragon's downfall and death. Humanoids are terrified of dragons; and however strong a dragon may be, it's no match for an organized humanoid kingdom.

While tales abound to the contrary, dragons are not fools. They don't seek beds of cold metal coins, nor do they sleep more soundly than any other being in a dangerous world. Dragons take steps to ensure they're not caught off guard, settling in difficult to reach lairs, with hazards and other protective arrangements.

Though dragons are very large in size, they're extraordinarily nimble — this being part of the magic that enables them to fly. Thus, dragons don't flop around clumsily, enabling attackers to easily seek their rear or flank. Since a dragon's body is covered in spines and sharpened ridges, they cannot be grappled, even by giant creatures, without damage resulting from the dragon's writhing body, while the dragon's able to rip them to pieces with fangs and claws.

There are some who believe dragons are cowardly or easily deceived, or capable of thickheaded actions. Notions like these arise from humanoid myths invented for the sake of drama and not reality. Those encountering dragons would be wise to remember that even the youngest have lived for scores of years, and are likely much older than the humanoid seeking to outwit them. Nor are dragons born with soft, Achilles' heel-like places, in which they might be killed with a single blow. They require much great deal of effort to kill, always giving as good as they get.

There are no fear rules associated with dragons. All dragons can speak, though hatchlings are primitive in their speech patterns. All dragons of a certain age possess spells.

With some exceptions, dragons are winged creatures with a long, serpentine body, tapering towards a feathered or leather-like fan tail. The unusually large head benefits from an extremely flexible neck, enabling it to snap forward at will. There are four limbs, each of which ends in five-toed claws. The dragon's head may possess horns, ridges or flat-raised plates of bone; heavy, impenetrable scales cover most of its body.

Dragons are intelligent creatures of all sorts; some are bad, some are good. They may be active, cowardly, recalcitrant, zealous, hateful or diffident — just as humanoid creatures are. Not all dragons are solitary, but this is a common behaviour among the most venerable.

Dragons with metallic colouring, such as silver, gold, copper, brass or bronze, tend to dwell in high alpine places, preferentially in the ice caves of glaciers. These are generous, patient and tolerant of humanoids, though cautious of their ways; if carefully and respectfully approached, especially by those with a reputation, they can be welcoming and helpful. Nonetheless, they tend towards reclusiveness and won't tolerate interlopers and rude persons for long. Within those lands granted to their sovereignty, they may do as they wish without fear of outside repercussions.

Dragons with base colouring, such as red, blue, black, white or green, are more scattered and individualistic; they dwell in [[Cavern|caves]], ruins, dungeons and other lost places. They despise humanoid-kind and most other races, treating others with scorn and contempt ... but though they will attack outsiders who near their lairs, they won't venture outwards where they might be hunted down. If an attempt to parley is made, these creatures are hateful and belligerent.

They are meat-eaters, consuming several large animals at some seasons of the year and then fasting for months at a time. Much of their sustenance comes from supernatural sources, but dragon mothers will eat prodigiously before giving birth. Their sleeping corners are often stuffed full of uprooted trees, stones, left-over bones ... with some large open areas to permit freedom of movement. Floors are often heavily covered with dust, gravel or fresh loam — and sometimes water as much as three feet deep.

Dragons pass through eight stages of growth. Regardless of their age, they are presumed to have the same number of hit dice as their older brethren, as their mass at birth is less than a full grown adult, younger dragons have less hit points (h.p.). The table shows their weight at each stage, as a fraction of their adult weight (approximately 500 lbs. per hit die). As dragons pass beyond the adult stage, their bones grow denser, adding to the creature's total mass.

Once a dragon reaches the adult stage, they will adopt a character class as a druid or mage; the table also indicates their approximate level in these classes, with their corresponding additional hit points, between the ages of adult and ancient.

These creatures also gain full spellcasting benefits, as well as practical sage abilities, from their accumulation of experience while pursuing these classes.

Dragons are fast moving creatures with an above average armour class and action points (AP). All dragons can fly, though many forms of dragon don't possess wings.

Dragons receive four attacks when fighting enemies in melee combat, using their claws, their enormous jaws and their whip-like tail. These four attacks can land on four possible victims. The neck allows the dragon to snap its head forward as much as 15 ft., or three combat hexes, when striking at an enemy; therefore, it's best to keep well back as a spellcaster. Moreover, the head can attack anyone in a 300° arc — except directly behind the dragon.

The tail, covered with spikes and ridges, can cause nearly as much damage as the dragon's jaws. Dragons usually use it to sweep the side away from the head's attack, particularly using it to attack the rear. Dragon's possess 180° peripheral vision with each eye, and will have time in a fight to glimpse targets anywhere. Because of the tail's weight and size, creatures that are stunned by it are knocked to the left or right a distance of 2 hexes from their location before the hit.

In addition to its head and tail, the dragon attacks with both claws; it uses these against targets at the fore of its body. Each claw does a comparatively small amount of damage; but if the dragon attacks strikes with both claws, it gets two additional raking hits with its rear claws, reflexively causing damage equal to its forward claws. This damage automatically lands on whichever target or targets were hit by one or both claws.

Dragons with wings, who have achieved an age of being near-grown, are able to beat these with sufficient force to create a strong, buffeting wind. Due to the gusting nature of this wind, it's able to cause damage and stun opponents. Younger dragons cannot buffet with their wings.

Dragons buffet only when they're readying themselves to take flight or deliver their breath weapon. They forego any attack with their jaws or claws, beginning to beat their wings rapidly. All creatures in front of the dragon must save vs. magic — a successful roll indicates the character has been able to lay flat, take hold of something or just by chance is located in the shadow between conflicting gusts of wind. Others suffer 1 h.p. of damage per hit die of the dragon, having been blown off their feet or being struck with light items within the dragon's lair (like scattered bones, branches, small stones or slashing spray if water covers the floor).

All creatures in the path of the buffet must fall back one hex; creatures smaller than 80 lbs. must fall back two. This could blow creatures off ledges or into the path of something worse. Buffeting will extinguish torches and open lanterns. It forces flying things to land. Clouds, fog and precipitation caused by spells will be torn asunder, as will dust devils; a dust elemental can endure.

Buffeting can take place simultaneously with a dragon using it's breath weapon.

The dragon's breath weapon is among the most dangerous attacks in all of D&D. The dragon is able to turn its head will spewing forth its gullet, so that all persons in a 120° arc, within the reach of the dragon's breath, are engulfed. Dragons always direct their breath weapon against whatever creatures seem the most dangerous — noting that dragons are very observant and experienced, and can easily measure up the strongest fighter or spellcaster in a gang of attackers. The breath causes 1 damage per hit die of the dragon, per age of maturity. For example, an old dragonis oxychalkos, or copper dragon, with 8 hit dice, causes 6x8 damage, or 48 total.

This damage is halved for those within the area of effect, if a saving throw against breath weapon is made. Because this still causing considerable damage, while at the same time the dragon can buffet and strike with its tail, any fight with a dragon is fraught with peril.

The effusion of breath differs from dragon to dragon. Apart from fire, dragons are known to breathe acid, lightning, blasts of ice, sleeping gases, poisonous gases and more. When subjected to some forms of dragon's breath, recipients must make saving throws for items they're carrying, which might be burned, shattered or melted by the attack. Because the dragon's gland from which this spew emerges can produce a finite amount of breath per day, there's only a 50% chance the dragon will breathe instead of taking some other action, while the dragon can only breathe three times per day. Note, however, that if a dragon is truly hard-pressed, it will make one last breath weapon attack before fleeing.

Dragons may take advantage of their lair's high roof to fight while hovering, especially if they're in jeopardy. By taking a position 20 ft. above the ground, they're able to attack with their head and tail, but not with their claws. They also lose the benefit of causing incidental damage. However, they're impervious to melee attacks and, if stunned, are counted as rising to 25 ft. above the ground while continuing to hover.

By flying from one end of the lair to the other, they're capable of targeting any visible target from the air with their breath weapon. When it comes time to retreat, the dragon has a large accessible tunnel which it can escape through — unless this tunnel is blocked.

All dragons of a certain age possess spells. They prefer investigatory spells, followed by spells that promote restraint, charm, stunning or otherwise non-lethal spells. All spells can be used at will, without a casting time, but each requires 2 AP to discharge.