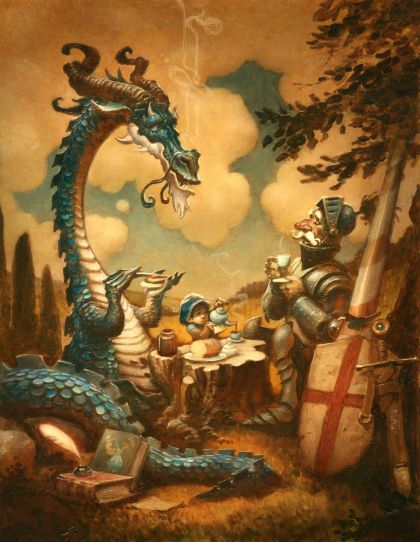 When introducing known Non-player characters into an ongoing campaign, the Dungeon Master should have a clear, comprehensive understanding on why these characters are there, and how they would logically act when encountering the game party. Therefore, a random die is NOT recommended in such cases.

For example, if the party has gained the attention of the local thieves' guild, and that guild knows what the party is doing and why, then an encounter between the thieves' guild and the party should play out according to the most logical motivations of the NPCs in this case. Either the guild is angry and prepared to threaten or kill, or it is interested in negotiation, or it seeks information of some kind. The best answer should be obvious to the DM and the parley played out accordingly, without any need to roll a reaction die.

However, if the party were to select an NPC or group of NPCs at random, or if an encounter die were to conjure up such a group randomly, then it follows that the reaction to the party would also be random, as no previous circumstances exist stipulating an expected reaction of the kind above. In this case, the DM benefits from having an "initial response" that's rolled randomly. The need for the roll is likely to occur due to two common reasons:

1. The players make a request of the Other that may or may not be fulfilled.
2. The mere presence or appearance of the party creates a backlash on the Other's part.

A "parley" between strangers is often a simple request between parties to let the other pass unmolested, called "free passage." Similarly, combatants meeting upon a field of battle may request a truce or a temporary cessation of hostilities. In some cases, a random roll may be in order; however, in most cases, enemies with an intelligence of 11 will nearly always accept an offer like this, so long as neither side surrenders anything of value. An agreement to fight over the same ground a day later, or to agree that neither party holds that ground, the gain or loss is viewed as equivalent and therefore, reasonable.

However, if a request is made where the players gain while the NPCs concede material value, status, honour or time spent, then a roll must be made to determine if the players' request is fulfilled. In such a case, the player or players clearly state what's wanted, whereupon the players choose which of them will roll 3d6. The number needed to succeed, and the consequence of failure, depends upon the request being made. Note that some requests are so excessive that they can never be granted, and that even asking for them is tantamount to a declaration of hostilities.

Much of the difficulty in making requests involves differences between the speaker and the listener's characteristics. The table of modifiers adjusts the 3d6 roll up or down (though mostly down) where the speaker is of a different character class (fighter vs. cleric), race, gender, social class (peasant vs. gentry vs. noble) or religion. Humanoids other than humans or demi-humans, such as goblins, orcs, kobalds and the like, are particularly resistant to fulfilling requests.

The best locations for parley are none of the above, being public spaces such as taverns, streets and lanes ("open roads" are outside villages, towns or cities), market places, fairs and so on. The speaker's workplace is best, but the speaker must have a workplace. If both the listener and speaker have the same workplace, then the modifiers cancel each other.

Direct communication has no modifiers. Unusual communication, such as trying to convey a request while running and shouting at the listener, or whispering desperately, suffers the -5 penalty given. A scrawled note requires the ability to read & write. An eloquent letter can only be written by clerics, mages, illusionists or monks, or persons whose progenitor's legacy includes training in a lettered profession, such as scribe, lawyer, political advisor, professor, tutor, sinecure, banker, guildmaster and the like.

Regarding the relationship with the speaker, an acquaintance is someone whom the speaker has been introduced to by a third party. An associate is someone with whom the speaker regularly does business, in which an exchange is made; this would include a landlord. An official with authority is any person whose position gives them the power to tax, legislate, judge or enforce regulations, including magistrates, city scribes and overseers, judicial persons, guards or town watch members.

The various adjustments are cumulative. The listener will have many characteristics that apply, such as a female elven cleric of gentry social rank (5th level or better, plus owned land and employees), while also being an official with authority and a complete stranger. If all these differ from the speaker, then the accumulated modifier is -14. This is intentional; players must adapt themselves to making requests of people with whom they share many common goals, and not expect that simply because they happen to want something, the nearest NPC has any probability of giving it to them.

Assigning a "rank" to requests is a daunting prospect, but an attempt has been made. Examples not included, that might occur in game play, can be judged as needed; the DM can expand the table afterwards, ever improving the list. When making or asking for a bribe, the player is asked to roll the die to determine an amount their character "feels" is appropriate in the situation.