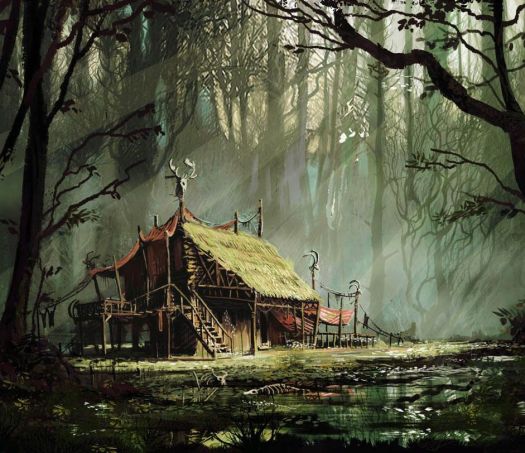 A purposefully isolated house, offering freedom and little else.

A type-7 hex is a designation used to describe populated area with the least amount of infrastructure possible, that being 1 point. With an area of 38.53 sq.miles, and a diameter of 6.67 miles, hexes of this type reflect a bare minimum of amenities, comforts and outside assistance. These individuals depend upon growing their own food for survival, striving to make the most of the land they occupy. Nonetheless, their small contributions of extra food to the world market helps sustain more sophisticated persons dwelling in the largest cities, where edibles are always needed.

The precise nature of a given type-7 hex depends upon more than this designation: it also depends upon symbols representing food production, wealth and facilities. Different amounts of development for "type-7" are stipulated by the amount of "bread," "coins" and "hammers" a given hex possesses. The lowest type-7 hex that can exist is one represented by 2 bread and nothing else.

Farmlands consist of isolated houses and cultivated fields. They lack every kind of service or development. Each hex has approximately 250 to 400 acres of plowed farmland, divided into 15-30 acre plots called bovates or virgates. The farmers that work these lands have staked out a claim based on their courage to farm wild, isolated areas — but for them, these places would be called "wilderness." A better description would be to call it "hinterland."

Families dwelling in these hexes don't "own" their land; but as no authority directly claims it, the residents have achieved a freedom of sorts. Total population is 50 to 80.

Farms are laid out at a half-mile distance from one another, to make the most of foraging the nearby hinterland for game, mushrooms and other forage. Each family dwells in a hovel of their own construction, with unsheltered gong boxes as amenities. Farms favour access to rivers or routes — if sizable examples of these exist — so it's not unlikely to find a string of farms following such courses. Otherwise, farms will make use of tiny brooks, paths and even trails if no more is available.

The most vigilant farmers can manage as many as 30 acres of crop a year, carrying their excess to garners located in thorps or hamlets, or even larger centres. Very rarely a family may be met by a tax farmer, who's entitled to seize produce in the name of the realm — though this must be done carefully if the official doesn't want to risk life and limb. Beyond such persons, a farmer might chance to encounter a party of bandits ... but as the farmer has nothing to steal, and potentially shelter to offer, usually arrangements are made between these disparate groups. A party of player characters stumbling across an isolated farm of this kind shouldn't wonder if the farmer is ready to barter food for difficult to obtain tools or unusual fancy items.

As suggested, these hexes may include features such as hills, streams or roads, like the dirt road in the third example. Note that it's entirely possible to find type-7 hexes like this along important trade routes or major roads, or against the banks of huge rivers. The very fact that the hex is designated type-7 indicates that the soil is less than ideal, yet capable of supporting a dozen families, more or less. The example fourth from the left shows a type-7 hex occupying a hex in which a sandbar separates the sea from a freshwater lagoon. The residents of this kind of topography would depend heavily on catch fishing. 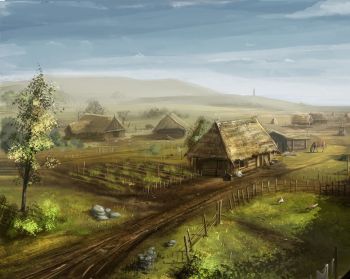 A thorp has a few scattered buildings and virtually nothing in the form of wealth.

Single thorpes occur in type-7 hexes that possess 1 hammer. This only happens in places where navigable or semi-navigable rivers occur ("semi-navigable" describes a river that can be travelled in a rowboat, but is impractical for significant commercial traffic). A river of this time is at least 2 pts. wide on the game map. This circumstance has enabled the development of a tiny group settlement, a thorp, which is responsible for collecting raw materials and transshipping them to more important places. The hammer symbol is added to the type-7 hex because of this river.

A thorp provides minimal services, including a boat dock, garner, gristmill, ox tether and saw pit. The certain presence of a river assures minimal water traffic and power. It marginally increases the amount of land under cultivation, adding 10% to a type-7's normal acreage under plough (275-440). Farmland tends to cluster near to the thorp, though a distance of a half mile between farmsteads is still common. Including thorp and surrounding farmland, the population is 60-118.

A bare minimum of traffic flows through the area, primarily outsiders who come to collect gathered food during harvest times. A forest permitting, timber and lumber is shipped out in any season except winter. Hexes of this type produce no ores or building stone.

For a player party, a common thorp offers a safe place to camp, the potential for gaining associates and even claiming an unoccupied acre and building a permanent residence or storage facility. So long as the party's friendly, there's little reason for anyone in the area to challenge the party's settlement, or investigate into their property — after all, each new farmer, escaping the troubles of a civilised world by coming to this backcountry, is a stranger at first.

Thorps aren't shown on game maps, but their presence can be easily predicted, as we know what to look for. Thorps tend to be located at the fork of rivers, places where a road meets a river, or places where a bend of the river offers good protection — the white circles below give an indication of where the thorp might be located, either on one side or the other of a river. Where a swamp dominates a hex (fourth from the left), the thorp is sure to be in the one place where dry land meets the river. In some cases, any number of locations might serve; if a road runs along a river, the mill and boat dock might be a mile away from the remaining thorp. It's good to be flexible in one's interpretation of the map. 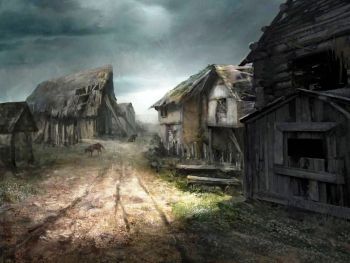 A squalid, backward place, notable for being dirty and unpleasant, emblematic of long-standing poverty.

Backwater villages are isolated places where very little development has taken place. Two hammers can only occur in a type-7 hex if a settlement is present, which bestows a +1 bonus coin, food and hammer to that hex. A settlement hex of this type cannot include a river of more than 1 pt. width, else it would have 2 hammers. They do, however, possess an actual village with at least 100 people, and quite possibly many more. Such places retain a collective government, with an agreed-upon head authority; most everyone will belong to a single tribe — or even, in the case of settlements of less than 150 persons, a single clan.

Because such places are usually a hundred years old, even going back centuries, timbered houses are common. Without the barest economy, however, maintenance and attention are lax, so that such places possess a decrepit, ravaged look. Self-support is of the greatest importance. The more exuberant younger members of the community readily go off to seek their fortunes, are pressed into the army or seek work aboard ships. As such, population remains stable as years pass.

Nearly all the villagers will be farmers, with the fields surrounding the town or stretched out upon a road or small river. There may be easements or low walls between the fields, but tending the fields is often a communal activity. Private ownership is shared among immediate families, any one of which may have as many as 50 adult members, counting older generations, siblings and cousins. Residents walk from the village in the early morning and return at night, commonly together, while some members stand guard at night against wildlife bent upon eating the crops.

The total amount of land that's cultivated equals the settlement's population divided by 65. For example, a settlement of 195 would give a product of 3; the formula to determine cultivated land equals [3d4+(3x4)] times 50. Where fractions occur, round up to obtain the best result.

A settlement village of this type possesses those facilities associated with a thorp, discounting a boat dock or gristmill, since no usable water course is present. If no trees are present, there is no saw pit. It may be understood that, although a village, a place like this is distinctly backward.

A measure of standardised taxation exists, socage, in which dwellers must dole out a part of their farm produce or else fall into debt. In hard times, it can be difficult to survive on the produce that's kept by individual families. As individuals, the peasants are free landowners, without the burden of serfdom or rent ... however, most aren't formally recognised as free persons. As such, they're subject to socage due to legally owning their property

Debt is relatively rare. There's no practical chance that a facility may be closed due to failure to pay taxes, since its running would be taken up by a family member or other person in the village. Taxes are collected yearly, within two months after harvest has begun.

There are only a few settlements with these characteristics. Only two are known, both from the County of Bratslaw in the Kingdom of Poland. Plainly, both are surrounded by forests and wilderness, serving to isolate them from civilisation.