Hex groups are used in mapmaking to provide cohesion to the random distribution of infrastructure. The game world is mapped in 20-mile hexes, this being the best size for estimating travel times for player characters and determining the movement of goods and services. As a means of expanding details of the game world, these hexes are progressively subdivided into smaller and smaller hexes, reaching all the way down to the combat hex, which is 5 ft. across. 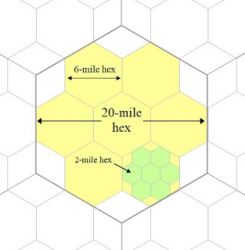 20-mile hexes are subdivided into nine hexes that are 6.67 miles across, called "six-mile hexes" as a simplified misnomer. Two of these nine hexes are shared with adjacent 20-mile hexes, as shown in the sketch provided. Six-mile hex maps are used for local regions and to calculate general productivity and wealth. A Hex Group describes the infrastructure distribution inside the 20-mile hex, among the six-mile hexes, as determined by the method described below. Each individual hex is defined by its Hex Type, from 1 to 8, by how much infrastructure exists inside that one six-mile hex.

Six-mile hex maps are subdivided into nine hexes that are 2.22 miles across, called "two-mile hexes." These are used for closely mapping areas where the party has settled, where great detail is needed for clarification. The "Hex Type" defines how many of these two-mile hexes are domesticated rather than wild.

A hex group with zero infrastructure has seven type-8 hexes; "type-8" being the least civilised type. Every six-mile hex in this group is wild, without any human structures or facilities. If adjacent to human culture, a hex like this would be considered "hinterland" — visited regularly by hunters and gatherers, but with nothing more developed than an animal-made trail. 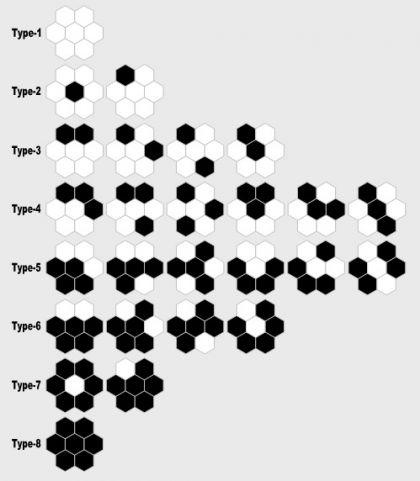 1 point of infrastructure would mean the hex group has six type-8 hexes and one type-7 hex. This type-seven hex, 6.67 miles across, has one two-mile hex within it that's civilised. The remainder of the 2 mile hexes, and most of the six-mile hex, is counted as hinterland. A single point of infrastructure is very little. It's understood, then, that the "hex type" is determined by how many two-mile hexes within that six-mile hex are civilised. None equals a type-8 hex; one equals a type-7; two equals a type-6 and so on, until if every two-mile hex is civilized, the six-mile hex is a type-1. Conversely, if there are no wild hexes, that's a type-1; and for each wild hex that's added, the hex becomes type-2 (includes one wild hex), type-3 (includes two), type-4 (includes three) and so on. While this counting systems seems confusing at first, it quickly becomes second-nature.

The image shown indicates the possible hex distributions for each type of hex, with black indicating a wild hex and white indicating a hex that's civilised. Type-1 and type-8 hexes can only have one possible pattern, or distribution: every 2-mile hex is of one type or the other.

Type-2 and type-7 hexes may have the single civilised/wild hex in the center of the group, or as one of the six outer hexes. There are seven permutations for where the exact distribution may be, but there are only 2 patterns: in the middle or on the outside.

The remaining hex types continue become more elaborate, with type-3 mirroring type-6 and type-4 mirroring type-5. Altogether, there are no more than 26 patterns, but as these patterns are turned clockwise and interface with the permutations created by adjacent hexes, they form an interesting and functional mosaic of civilized hexes.

A complete list of possible group combinations occuring at specific infrastructure totals for a hex, can be found here. Because the number of possible combinations is considerable, manually interpreting the die roll for each level of infrastructure quickly, and as often as it needs doing, is impractical. Therefore, a generator has been created that can be used on google sheets or downloaded. The file includes various flotsam and jetsam that can be ignored. 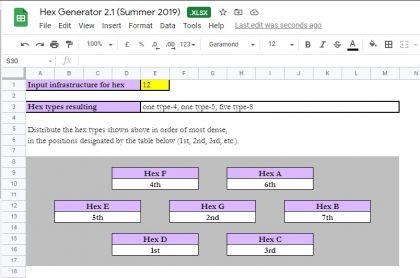 By inserting the infrastructure number in the yellow box and hitting return, the hex types resulting will be generated, explaining how many of each type. Seven boxes then show how these hexes can be arranged randomly. In the example shown, the single type-4 hex would be located in "Hex D," which has the box below reading, "1st." Thereafter, the single type-5 shown is placed in the "2nd" hex, which is "Hex G," the center hex. The remaining hexes are all type-8, which are placed in the other five hexes.

If the hex were partly water, so that Hex D had no land or perhaps an inconsequential sliver of land, then the type-4 hex would be placed in the next suitable hex in order, from 2nd to 3rd to 4th and so on. This allows a quick adjustment for odd circumstances that arise in mapping, without needing to create a complicated program to account for such things.