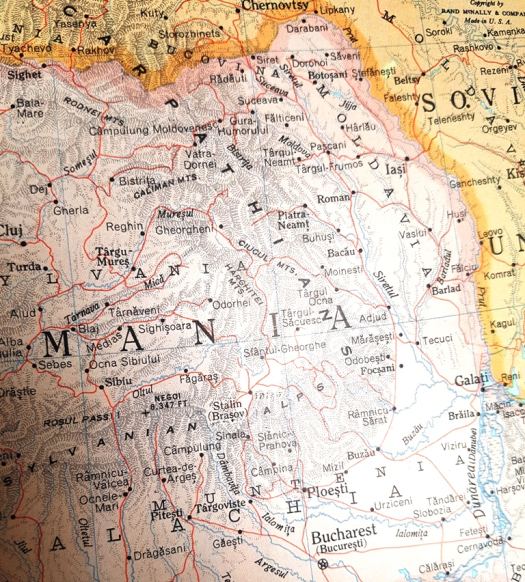 Settlements are pre-designated villages, towns or cities that originate with maps from the 1952 Colliers Encyclopedia. An example of map is shown on the right, originating with Rand McNally & Company.

The choice of encyclopedia derives from it being the earliest consistent depiction of the world, and therefore as close as can be gotten to the period of Alexis' game world, Earth in the year 1650. As each centre shown on the map has a 1952 population figure, this makes it ideal to determine the world's population and infrastructure.

Places are researched to determine their date of founding, if such information is available. This information can be sometimes be found in the encyclopedia itself, in various other books or on the internet, particularly with wikipedia. However, these dates are inconsistent between sources, and are particularly unreliable online. Accuracy is less important than moving forward, so no effort is taken to keep checking these dates to determine the most accurate source.

The number "4000" is used as a base number that argues most of the world's cities have been founded since the year 2350 BCE. This isn't always the case, but it's a reasonable guideline.

If the place is described as being founded later than 1650, then it does not exist. For example, the city of Bournemouth in England was founded in 1810. Therefore, there is no "Bournemouth" in the game world.

Having a founding date for every place in a province (a general name for all political subdivisions), we can now determine the population of that province.

As an example, we'll use the Viscounty of Dorsetshire, in south England, where Bournemouth doesn't exist in the game world. The final population totals shown have been adjusted due to plague and plundering: Dorchester twice (x0.81) and Weymouth once (x0.9). The total population for all four cities, including the one that doesn't exist, is 266,530. This, in fact, is almost exactly the same as the 1952 population for all of Dorsetshire: 268,480. Virtually everyone in the shire, apparently, lived in these four places. Seems unlikely, probably a case of different census dates, but I have no other numbers. It may also be that the populations for each centre includes its environs.

We include Bournemouth because the absence of the city also affects the 1650 population. So we take the total population of all cities as they are in 1650, divide that by what their population was in 1952, and multiply that by the 1952 population. End total population for all of Dorsetshire: 23,828.

This number is then used to calculate infrastructure.

Because settlements exist prior to mapmaking and infrastructure calculation, they are considered "special" from infrastructure-generated villages or towns. They appear as a larger black dot on game maps, rather than as a smaller brown dot. Each settlement in a 6-mile hex grants a bonus of +1 coin, +1 bread and +1 hammers to that hex. Settlements also have special rules related to hammers that allow for additional special facilities.