Hammers are symbols used on game maps to represent the number of accumulated facilities that a given civilised hex has constructed and presently maintains. The number of hammers possessed by a hex is determined by the hex type, which in turn is a product of infrastructure. Hex types range from 1 to 8, with a "1" indicating a highly civilised hex and an "8" indicating uncivilised wilderness. Thus, type-1 and type-2 hexes possess many hammers, while type-7 and type-8 hexes may have none at all.

Maps in which hammers appear come from hexes with two designations: "cultivated" and "mined." Cultivated hexes are primarily farm and pasture land, from which grow villages, towns and cities. Mined hexes exploit isolated areas for their mineral wealth. Type-5 to type-7 hexes that occur in mountains and other rocky places that are plainly non-arable are designated as mined. Any type of hex from 1 to 7, that appears in a well-watered valleys, hills or plains, is considered cultivated. Type-8 hexes are wilderness, lacking infrastructure and therefore can only have hammers if they're tamed by settlers.

In addition to the hammers added by type, an additional +1 hammer is awarded if the hex includes a sufficiently sized river. A +1 hammer is also given for each settlement a hex includes. This means a cultivated type-7 hex might have one hammer, gained from a river, apparently making it equal to a type-6 hex. However, one hammer as it appears in a type-6 hex possesses a superior allotment of facilities by virtue of it being a more civilised hex.

Therefore, it's best not to think of "one hammer" as an isolated quantity. Each hex type may have different number of hammer, depending on its location and inclusion of a settlement. An assignment of "1" hammer may occur in three different hex types. Therefore, the number of hammers AND the hex type must be noted in allotting which facilities the hex includes.

Facilities are commercial and institutional spaces and constructed establishments designed to facilite an activity, such as inns, dockyards, schools, warehouses, guilds, theatres, palaces, law courts, arsenals and many other places. More complex facilities require a higher level of financial and social commitment to bring into being, often with a large number of persons to operate and maintain; therefore, facility variety depends on the civilisation of the hex. Type-1 hexes have many facilities; type-7 have very few; and type-8 have none at all.

The table should be read so that a given hex type and number of hammers would include everything to the left and above that entry. For example, a type-5 hex with 2 hammers would not only include a gallows, guardpost and so on, but would also include those facilities listed under type-5 with 1 hammer ... and ALSO all the facilities appearing in the type-6 and type-7 columns up to two hammers ... a total of 33 different facilities all told. Thus, a type-1 hex with six hammers would have every facility on the table.

It can be assumed that the number of specific examples of a facility increases with "distance" on the table. Distances should be read according to the Fibonacci series: 1, 1, 2, 3, 5, 8, 13 and so on, with each new number being the sum of the two previous numbers.

A type-1 hex with 5 hammers is 1 hex from a barbican, so it should be assumed that there is still only one of these within the hex. The lighthouse is 2 over and 1 up, for a distance of 3 – this would mean there were 2 lighthouses (the third Fibonacci number above). The gallows is a distance of 7 from our example: this would mean there were 13 gallows in the hex. That number is obviously flexible; we could judge there were between 9 and 13, if it mattered. 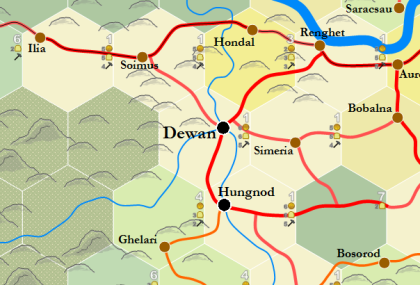 For example, the town of Dewan in Transylvania has a population of 5,832. This means that it can count the hammers in those hexes occupied by Soimus, Hondal, Simeria, Hungnod and Ghelari. The sixth hex is a wilderness and, while technically counted, contributes nothing to Dewar's total.

The hammers that exist are counted in a peculiar fashion, as shown on the Hammer Counting table. Thus, Dewan receives 31 points from it's own hex, 15 from Soimus, 7 from Hondal, 15 from Simeria, 31 from Hungnod and 3 from Ghelari. This totals 102. If Dewan were an even larger city, it would be able to count additional hammers from sources two hexes away, such as Ilia, Renghet and Bobalna. Bosorod is three hexes away and couldn't be counted in any case.

Not all advanced facilities occur due to the number of hammers, however. There are a number of financial institutions that occur only when there are enough coins. These are counted exactly as we count hammers: Dewan receives 63 from its own hex, 31 from Soimus, 3 from Hondal, 31 from Simeria, 63 from Hungnod and 1 from Ghelari. This totals 192. Obviously, Dewan is a much more important commercial settlement than manufacturing. This can be seen by the absence of any major rivers surrounding Dewan, while there are three other type-1 hexes.

The Special Facilities table indicates those facilities that occur if the collected number of points for coins or hammers reaches the number shown. Therefore, in our town of Dewan, on account of the hammer-points generated, there's a castle and a theatre. From the number of coin-points, however, the town also has a money lender, a merchant's guildhouse, a bathhouse, a yearly fair and a courthouse. Rolling a d12 and a d4, we can determine that the annual fair in Dewan begins on the 3rd Thursday of May every year ... in case the players are interested.

Some considerable amount of work is needed to complete the description of these various facilities and their influence over game play in the campaign. Ultimately, the desire would be to compel players to seek out specific places in the game world for the services that might be gained, from purchasing ordinary goods and food to seeking out further training or experiencing something magnificent that offers tactile inspiration. I have general ideas for how these things would function, but as yet I haven't applied these specific ideas to the source material. For the present, I'm glad to finally have the work organised. As the links on the table populate, my general sense of how these places can adjust and enhance D&D should become evident.