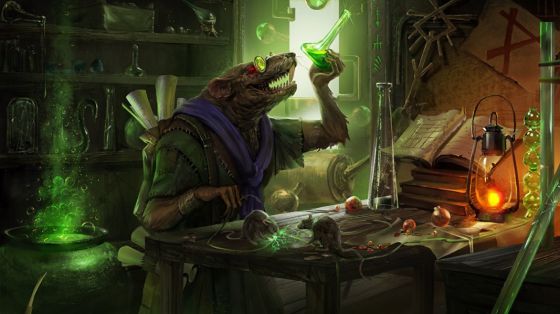 Alchemy is a sage study in the fields of Earth & Sky and Science. The study covers knowledge of natural materials, plants and elemental phenomena, involving the creation and refinement of substances, poisons, salves, ointments, potions and more.

To practice the making of substances, the following must be acquired to construct a laboratory. As much is needed for each status of knowledge, so that an Authority would require twice the articles listed below, while an expert would need three times; a sage would need four times.

While some of these objects may not be used pragmatically, it's understood that the presence of these items is as important as their use. Due to the complexity and time needed to create alchemical mixtures, it's assumed the laboratory will be under lock and key; an apprentice may be needed to look after the place, clean, adjust the experiments and so on.

If these precautions aren't observed, and the laboratory located in a place with public access — like a rented room in a house with other tenants, or a room taken at an inn — then the chance of an experiment being spoiled by nosy residents or servants doubles or even trebles. The processes of alchemy produce strange odours and sounds; these will likely draw curious persons to investigate, leading perhaps to dire consequences.

The knowledge included in this study is limited to the exact description of the processes the character can effect. It should not be imagined that being able to smelt mithril, for example, imparts any special knowledge in the fashioning of that mithril into a sword or armour. Similarly, while the character might be able to create a potion of fire resistance, it does not then follow that the character possesses the ability to install the power of that potion into an artifact. The character by means of this ability would be able to produce the potion - the making of other items or the incorporation of these products elsewhere are treated as an entirely different knowledge study.

Note also that most of the above it not created through a spell or by means of magic, but rather through hard, difficult labour. Some things may require considerable expenditure of time or wealth. Others things to be created would be subject to danger rolls, potentially threatening the character's life and even necessarily resulting in damage or injury.