These are sage abilities relating to the bard. The player should be prepared to choose an artistic form, as this will be required when a field of knowledge is chosen.

Unlike other classes, bards have many fields of knowledge, sixteen altogether, that they can choose from. These are divided into two groups. Artistic fields include the 14 art forms available to the bard class, as shown below. General fields include 2 institutional forms, one related to the selling of art and the other to the teaching of art forms.

Both Art World and Instruction can be chosen as the character’s primary field — but in such cases, no knowledge points would be gained at all in any artistic field.

However, in addition to the field they’ve chosen, ­any bard is also presumed to "dabble." This allows the bard to choose three additional studies from any field other than their own. They may not choose more than one study per other field. Bards will then gain a small amount of knowledge per level in these studies as well (and may choose to expand their available knowledge points by choosing the field of that study at a later time).

Having chosen a field and a study within that field, the bard is awarded 12 knowledge points in the chosen study (which becomes a "specialty"). The bard then rolls 1d8-1 for all other studies in the chosen field, generating numbers from 0 to 7. Finally, the druid rolls a d4-1 for all out-of-field studies, either in general studies or in the three studies in which the character dabbles.

Architecture includes the planning, designing and constructing of buildings and other structures, for the purpose of housing, defense, beauty and other benefits. The field covers every aspect, including homes, fortifications, temples, decoration, materials and town planning.

Ceramics enables the creation of vessels, objects and figurines made of clay that's hardened or sintered in fire. Ceramics includes many possible options for the structure, artistry and beauty of earthenware, porcelain and stoneware, enabling even the investment of magic into these objects.

Circus provides the skills and diverse entertainment styles associated with physical achievements of amazement, daring, humour and the trained performance of animals. This collection of skills is made to be put on display to a stunned and amused audience.

Dance is a performing art form consisting of purposefully selected sequences of human movement, with aesthetic and symbolic value, designed for observers of a particular culture.

Drama includes the manner in which a story is told through presentation by an actor or actress, adopting a character within a play. This involves a broad range of skills and studies, with aspects affected by classical and medieval works, the present post-Elizabethan and Jacobian forms, opera and masques.

Fine art includes specifically those arts designed to produce a visual impact without any intent to produce works for practical use. Often seen as the highest degree to which the imagination of the artist influences all genres of art.

Gastronomy examines of the relationship between food and culture, the art of preparing and serving rich or delicate food and the study of healthy eating.

Leather work describes the making of unusual organic products from plants and animals, reaching well beyond the tanning and processing of leather. The study also incorporates many odd skills related to candle-making, perfumes, honey, opium, caviar and more.

Literature masters storytelling for the purpose of providing intellectual or artistic merit, as a means to enlighten, communicate or serve as a source of knowledge and reference for a literate audience. 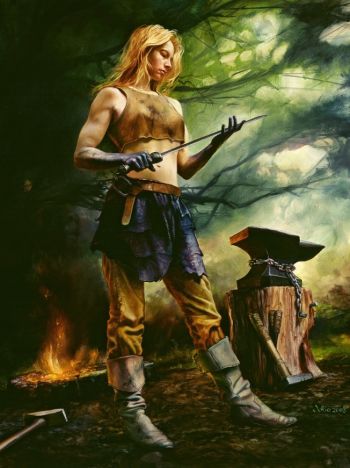 Metalwork describes working with metals to create individual objects, assemblies or large-scale structures. The field is perhaps the least aesthetic and most practical of all bard skills, but each study retains artistic elements within it’s scope.

Music involves the creation and performance of music within the cultural and social context, as an important part of many people’s way of life, regardless of their particular skill.

Puppetry depicts a form of theatre that involves the making and manipulation of puppets and other inanimate objects, to create a dramatic performance. A very ancient form of theatre, puppets are seen as objects in rituals and as symbolic artifices.

Textiles includes the use of plant or animal fibres to construct everyday and ornamental clothing or arts. Includes multiple techniques used to embellish or decorate textiles, including dyeing, printing, knitting, tailoring, hooking and more.

Woodworking includes the activity and skill of making objects, furniture and large-scale structures out of wood. Includes the dyeing, staining and polishing of veneer and the use of resins as glues and ornamentation.

Art World describes the overarching network of persons producing, commissioning, presenting, preserving, promoting, criticizing and selling art of every kind. Within are untold numbers of hidden or obscured subcultures, with their own art markets and design movements, with overlapping motives and ideals.

Salon provides an institutional conference for the promotion of artworks of refined taste, that a philosophy and proven merit of art may be established for the benefit and education of the elite of society.