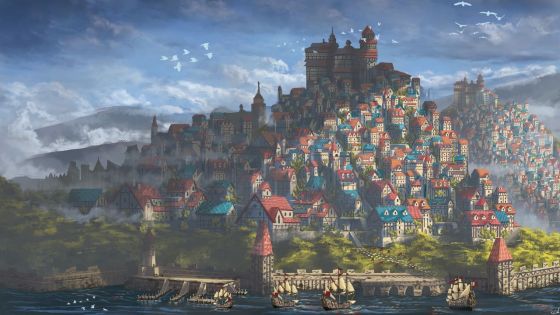 Cities are large humanoid settlements that develop organically from towns whose access to abundant water and food sources are matched by geographical access to resources, practical trade routes, navigable waters and stable political environments. The largest cities possess rare conditions, such as the sole access to large natural harbours, it's location as a trading gateway and their development as centers of spiritual or intellectual thinking.

Constantinople, one of the largest cities in the world, has an excellent harbour, powerful defensive capabilities, stands astride two of the world's most important trade routes and for more than a thousand years, acted as one of the world's great religious centers. Today, it is the political center of the vast Ottoman Empire. Due to its inherent characteristics, it's dominance as a city was inevitable.

In one degree or another, all cities, even the smallest, possess similar characteristics — they occur and thrive in those locations in the world suited to an expansion of population, political purpose and commerce. As a rule of thumb, a city is a settlement with 5,000 or more inhabitants.

Physically, the city is a complex organism designed to draw in sufficient supplies and resources for its people, their needs and the needs of manufacturing, so that finished goods can be made, collected and shipped elsewhere. Meanwhile, the workers need to be housed, along with those in the city that provide vital services — such as maintaining order, keeping accounts, ensuring sanitation and eliminating vermin, the collection of gong, protecting the city from outsiders and governing the population. Thus the city operates like a tremendous valve, breathing in materials, breathing out valuable goods, which sustains the economy and welfare of the inhabitants. This is naturally a simplistic description, with the needs of different cities with different climes, cultures and geographies varying to a wide degree. Nevertheless, it serves as a model from which deviations can be determined and designed.

These are extensive areas for the loading and unloading of goods, most importantly foodstuffs, livestock, building materials, textile fibres, timber and mineral ores. These are carried in along overland roads or unloaded from ships at a "dockyard," or quay (pronounced "key"). Whereas some products can be left exposed to the elements, such as animals and stone, others must be protected so as to avoid rot and spoilage. Thus, enormous outdoor spaces are relegated as "stockyards," while separate from these are enormous sheds constructed of minimal framework to protect huge bales of wool or cotton, sawn lumber, boxes of ceramics or glass packed in straw along with enormous collections of fruits, vegetables or treenuts. Valuable goods, like perfume, paint, dyes, cloth, beer, wine and so on are more carefully stored in strong, well-built structures surrounded by guards. Enormous granaries store mountains of grain and animal feed.

In the time of Alexis' World, the old open market, where everything could be purchased, is a shadow of its former self. The existing market concentrates in providing unprocessed material goods direct from the outside world; thus, the town market occupies a large somewhat shabby square immediately adjacent to the city yards. Though well-connected with the whole of the city, it's considered a poorer quarter — but very little of value can be purchased from open stalls or, more commonly, push-carts that can be wheeled out in the morning and stored away at night. Except in sub-tropical environments, where tents are cooler and goods must be protected by the sun as well as the rain, a tent stand is less comfortable and desirable for the purchaser. They do persist, however.

Each yard possesses its individual artery into the city; these are either streets or avenues, depending on their importance and the volume of goods that must be transported each day. For example, the mills must be immediately adjacent to the granaries; the flour made in the mills must be distributed among bakeries, each with their kilns and shop-fronts. The "wet-market," where animals are slaughtered, is adjacent to the stockyard; beyond the wet market are butcher shops and chandler's rendering shops making tallow for candles. Wool and other fibres are cleaned by the fullers, whose products are collected by the weavers; from there, lesser streets take those goods to the drapers, the tailors, the milliners. Beyond the tailors are lanes full of weavers, embroiderers and dressmakers. In each case, the more valuable the goods, the further it are found from the town yards; in part because they are dependent upon a chain of artisans and in part because valuable goods are lighter and easier to carry. We can posit that the tiniest goods, made by jewellers, lapidaries, clockmakers and perfumers, are the furthest away from the town gates and docks where goods are imported.

As a rule, the dwellings of city workers are as close as possible to their place of work. Like the description of the trade quarter, workers whose occupations involve heavy physical labour, like sawyers, brickmakers, puddlers and potters, manage tons of material goods in their trade and their homes are found nearest the yards. The same must be true of the ship and boatbuilders, who must be near the water, along with cartwrights and wagonwrights whose services are demanded most by merchants loading and unloading their goods. Artisans whose product produces an intense, unpleasant odour, such as the aforementioned chandlers and slaughterers, as well as vintners, brewers and fishmongers, are also be nearest the yards. The homes here are modest but sound; the wives of these workers work as launderers, servants and midwives. Brood-raising of half-a-dozen or more children by one or two women on behalf of an extended family is common. Here and there will be found public houses with stools and few tables, if any. Wooden chapels with benches are full on holy days. 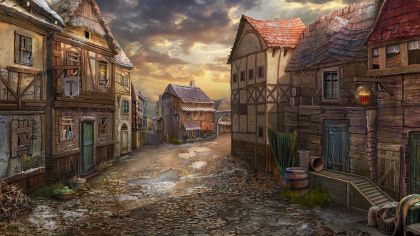 In some areas adjacent to the heavy labourers are neighbourhoods where erstwhile industries have collapsed; and now for these people, no traditional work can be found. These outer areas decay, becoming "borghettos." The former structures, for lack of maintenance, collapse or burn, so that portions are composed of empty lots. Such places are populated by beggars and those who turn to desperate activities to maintain themselves; often, impoverished outsiders, sometimes hated like the Jews or Gypsies, also collect in these areas when legitimate work is denied to them by the guilds and city authorities.

In parts occupied by guilds producing higher-stage goods, half-timbered houses appear; streets and lanes grow wider, while avenues connect the area with more wealthy districts. Row houses surround private courts. Connected to the artisan's working areas are shopfronts, operated by the journeyfolk's family or apprentices; it's too early in the game world for these to have glass windows and displays; but shoppers, including the gentry, parade along the streets and lanes, poking their heads inside to purchase. It's in places like this that player characters will buy armour, weapons, gear from the blacksmith's, new clothes, instruments, cakes, cooking utensils, paper and books, porcelain cups, furniture and so on. Between the shops will appear taverns with tables and chairs, inns, scribners, counting houses, traders. Stone churches with pews and are sprinkled about the neighbourhood, with open doors for those who are appropriately dressed and washed. The town watch protects the shopkeepers, turning a blind eye to outsiders during the day and monitoring them closely at night.

Finally, where the artisans of highest repute dwell, there are a great many other services to be found: libraries, brokers, barristers and solicitors, moneylenders, tutors and apothecaries. Some avenues pass gardens and promenades. Merchant houses made entirely of stone or brick impose high above the pavement. A stone church appears on every block. There are no public places to drink; guildhouse parlours are for members and by invitation. Here and there is a mansion owned by a noble family, a great merchant, a famous soldier or admiral and such like. The town guard exist to exclude the hoi polloi, who have no business in these places.

This is the centre of every aspect of the city's life. A city may have any number of "squares" or "plazas," dedicated to the arts, colleges, the army and so on ... but the Courthouse Square describes the location of authoritarian power over the city. Normally, it's to be found adjacent to the most prestigious of neighbourhoods, with a single avenue that connects it to the middle neighbourhoods and ultimately the yards, and the Citadel, described after. As cities are bustling, dynamic places of trade, military power and wealth, a collection of entities that must be in constant communication with one another can be found around the Courthouse Square.

This includes the monetary & tax representatives of the Monarchy, located in a palace; the city council, who enforce the laws and legislate daily activities; the cathedral or temple, for spiritual guidance; the merchant's guild, representing the combined force of all the individual guildhouses in the city; and finally, the court of justice, including a prison, barracks for the crown's soldiers and the means of executing offenders. All of them involved in running the city, and each with its own particular jurisdiction. So to speak, in conflict with one another but also necessarily acting in coordination with one another. Occasionally, the faction of one group might rise up against another, bringing about rebellion, martial law, a lessening or intensification of the monarch's prerogatives and so on.

Not every city has one; and occasionally, it is no more than a castle keep or bailey. The occupant of the citadel takes no part in governing the city; this is the pre-eminent lord or lady, or noble, occasionally a royal, whose power extends over all the rural land that surrounds the city, and often beyond that. The lord's ancestor was here before there was a city; or even a town or village. The first manor house, around which a village would later be formed, was recognized by the monarch in former feudal times; or present feudal times in some parts of the world. As time has passed, the lord or lady continues to rule from "on high," as it were. He or she possesses a retinue, which may be employed at the service of the city, for a price, but which officially acts as an private army.