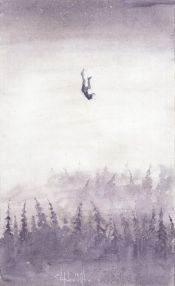 Falling describes incidents where damage is sustained through free fall, most commonly through failure to make a check, being forced from a ledge or the failure of equipment such as ropes, pulleys or platforms. The table shown attempts to provide details for how much damage is sustained for different sorts of falls, depending upon the distance and what kind of surface is landed on.

Flat, hard surfaces are level or marginally sloped, with a composition of packed earth, wood or stone, while lacking surface material that would cause additional damage.

Hard 30° slopes are composed wood or stone and allow some deflection, so that as the body hits the surface it also rolls, so that it suffers less damage overall.

Hard 45° slopes also allow deflection, but jarring additional contacts are expected as the body tumbles downwards along the surface; overall, the damage is better improved for lower falls than higher ones.

Scree describes slopes composed of loose fragments, usually rock, that will give when fallen upon, moderately lessening the damage received from falling on a hard surface.

In addition to the angle of surface, adjust the amount of damage done when the following elements occur:

Deliberate attempts to jump, without skill in diving, grants a dexterity check for every 10 ft. distance attempted. For example, a 50 foot distance would allow the character to make 5 checks. For every successful check made, the jumper is allowed to remove one die from the pool of dice that are to be rolled to determine damage. Making a jump assumes the expenditure of an action point on the character's turn. Involuntary falls cannot be reinterpreted as "jumps."

{add additional details about falling and jumping into water}