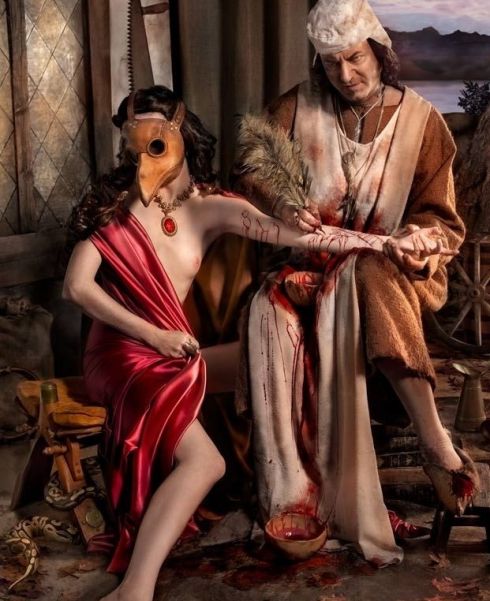 Bloodletting is an authority-status sage ability that requires the purposeful withdrawal of blood from a patient in order to relieve magically toxic humours within the body. It is a dangerous, unreliable form of therapy, recommended only for the desperate — particularly because, all too often, it can result in the death of the patient.

However, bloodletting is a potential cure for chronic supernatural affictions and complaints such as demonic possession, necrosis, curses, charms (including love potions), fear, magically-induced paralysation, transformation of the flesh (human/demi-human into undead, molds or slimes), insanity and so on. For many of these conditions, there is no mundane treatment ... and the effects of these can be intensely debilitating and exasperating for the sufferer. Some will gladly risk death if it means potential relief.

A practioner of bloodletting is called an ayurvedic.

The physician attempting to let blood may be without a class, or may be a cleric, mage or illusionist. Of these, only non-classed ayurvedics and clerics have the necessary training to practice using leeches. Otherwise, a knife is employed, and may be the only option if leeches aren't available. The leeches must be caught from a freshwater pool, must be kept in fresh water that is changed every other day and cannot be more than a month old. The duty of catching and maintaining leeches is often assigned to an apprentice (who themselves are not always reliable).

A non-levelled ayurvedic will have had years of experience before becoming an authority; these should therefore be treated as 4th to 7th level in their field. For this reason, they are often better able than classed persons, who may have acquired the skill on their own as early as 3rd level. The procedure requires the patient be made still, with binding the body mercilessly if necessary. Blood is then drawn from one of the larger external veins, such as those in the forearm or neck, called "breathing a vein." Drawing enough blood to induce fainting is considered beneficial. If sufficient blood is drawn, the magical effect will leave the body, curing the patient.

The act of bloodletting causes 1-2 points of damage per level of the patient, as biological units are the measure.

Because a great deal of blood must be drawn, there is a flat 30% chance of "runaway bleeding" occurring when using a knife. Using leeches reduces this chance to 25%. The effect appears to be of physical origin, but in fact it's caused by the magical force within attempting to kill the host as it rushes out. Upon fainting, the patient begins to bleed profusely ... causing 1-2 points of damage per level, per round. While healing can restore the hit points lost, the open wound can't be forestalled by this method. The ayurvedic must make haste to sew the vein closed — but there's only a 25% chance per round of doing so successfully.

Each round, a success roll must be made, while damage from the blood running out is calculated (and possibly while hit points are being restored by salves or healing magic). If the sewing isn't successful before the patient runs out of hit points, death occurs.

Due to the nature of death, the death's door spell isn't sufficient to restore the victim to life. Raise dead and resurrection, however, will be normally effective.