Lamiai [plural] are demonic beasts of complex origin, which many writers and sages have described in lurid, wholly inaccurate detail, contriving tales and myths of dissembling falsehoods and untruths through the centuries. Having never seen one, for they are quite rare, writers have identified the lamiai as possessing a serpent's body, having been descended from dragons and of being the mother of dragons, having hooves or lion's quarters, and more — much of which has confused the beast with the medusa. Vast numbers of deceiving pictures of the lamiai have been put forth, while bards and dramatists have invented thematic characters having little or nothing to do with the beast. 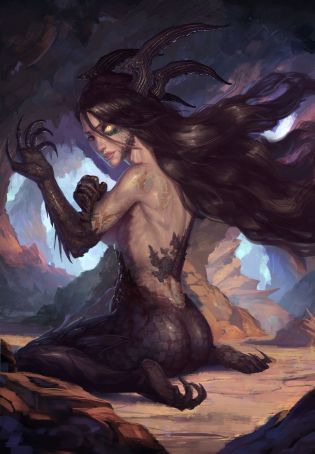 Few accurate details are known. No part of a lamia resembles a serpent, or a horse with hooves, or the parts of a lion or like any other animal. Their origin is so obscure that of the hundreds of legends that have been concocted, it is only certain that lamiai are monsters who prefer to feast upon the bodies of children and both young men and women. For millennia parents have warned their children of lamiai, to frighten them into good behaviour.

The beast appears unusually tall and lithe, with an unarmoured, unclothed body. It has a single luminous eye, gold in colour, which may be the right or left. The arms below the arm are covered with black scales and spines, as is the lamia's lower body; both hands and feet end in razor-sharp four-inch claws. The lamia is able to slash with all four of these every round, with dangerous, quick-moving agility. The appearance of the beast is deceiving, as the beast's flesh is composed of iron-hard dense muscle, resistant enough to turn aside even metal weapons; normal weapons can hit, but the lamia's armour class is 2. It is this solidity that gives the lamia an unexpected mass, for the body appears very slender.

Evidence of the voracious and insatiable nature of the beast is evidenced by the walls of its lair; these are covered in the stain of past feasting — for the lamia consumes in a state of frenzy, pulling and ripping the living victim apart. Children are snatched and carried to the beast's lair while still alive, where they are usually kept for many days, while the lamia goads its own lust to greater intensity for the actual kill. A single lamia has been known to snatch as many as twenty children in a single night; but they are more often content with one a month, until whole towns are forced to scour the hinterlands for the beast. Usually, it is never found, though the searchers are rewarded with having driven it elsewhere, so that it can feed upon victims in some other unfortunate place.

The lamia's gold eye can be removed and released, whereupon it floats and moves with blinding speed, as fast as 30 ft. per second. It is AC -10 and possesses a 90% magic resistance against spells; the magical resistance of the beast is only 20%. The lamia can see perfectly through the eye, and is even able to fight and defend itself, so long as the eye is present. If the beast is killed, the eye remains alive, often hovering over the body while frustrating attempts to catch it. The eye is of tremendous value for use in magical constructions.

When striking with its hands, each hit scored drains 1-3 points of wisdom from the victim. The lamia can sense this reduction of wisdom, which, if made low enough, makes the victim more susceptible to the lamia's natural ability for suggestion. Since suggestion relies upon a saving throw, by reducing its enemy's wisdom to less than 5, the lamia counts upon a -2 or -3 adjustment to the victim's save. Additionally, if the affected person's wisdom is reduced to 0, then he or she is denied a save.

This wisdom drain takes a long time to restore itself; those affected regain 1 wisdom per day of rest, and none at all if they aren't able.