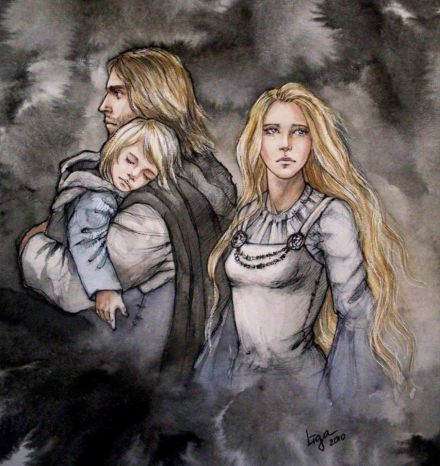 Like many things about the setting in which the player character adventures, the character has no control over the family he or she is born into, how many members it has, how successful it is or even if the character has a family at all. This reflects real life. Naturally, everyone would like to be born rich and be possessed of influence … but of course most of us are born the children of farmers, miners, artisans and other common people.

The character background generator is used to determine the nature and extent of a character’s family. The calculation is linked to the character’s strength, arguing (right or wrong) that “virility” relates to “fertility.” Stronger characters are more likely to be a part of a large extended family, with many brothers and sisters, a living father and mother, and probably more than one living grandparent. There is a fair chance that one or both parents are already be dead and that the character was raised by an older sibling, a grandparent or even an uncle and aunt. There is a fairly high chance that a character is an orphan, particularly if the character’s strength is 10 or less. The generator determines the gender of each sibling and enables the DM to determine randomly the order in which all the children of the family were born. This can be very important if the character is in line for an inheritance which would go to the eldest son.

Family relations are also affected by the character’s wisdom. Player characters with a low wisdom are more likely to be dispised or even disowned by their families. A high wisdom ingratiates the character with his or her family. Such latter characters would be welcome at home; they may choose to maintain a relationship with their family as part of the game experience.

The character's abilities affected by the occupation of a parent, grandparent or other family member. As children, characters learn ability skills related to that progenitor's profession. This may happen even if the character is an orphan — since the player's rise to a levelled class presupposes some kind of mentor. This background also affects the character's starting wealth and credit. Since a character can be conceivably born or noble birth, or from rich parents, the money available to a starting character can be considerable. Most, however, are not that lucky.

In deciding their background, a player can "make up" a family relationship of their own — but this would be an invention, or lie, as the character's background relationship is determined before the player can do so.