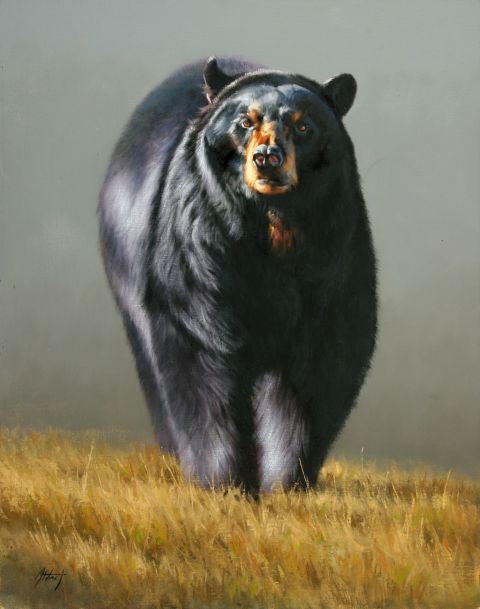 A medium-sized bear native to the New World, small in stature but very common, with a population perhaps the highest of all bears. They occupy forested regions, though they have been known to drift into the fringes of settled forests. They hibernate during the winter months, from as many as 3 to 8 months, depending on the latitude.

Black bears are highly dexterous, being capable of pulling the lids from pots or opening doors. They can climb large trees. They have great physical strength, being able to turn over objects up to their own weight, with a single foreleg. They are able to lope at an action point cost of 1/5th action points per combat hex. Black bears weighing up to 900 lbs. have been encountered.

The fur is soft and dense, not shaggy like that of brown bears. Albino black bears are found, but rarely. Bears have been hunted for their skins and for meat. Among some humanoid tribes in the New World, the black bear is treated as an animistic spirit.

They are most often encountered while foraging, particularly if food has been left out. Normally they seek berries and other fruits, but humanoid camps provide a ready source of meat and provisions. If encountered underground, is it most likely the bear will be hibernating — if disturbed, it will defend itself, intending to drive interlopers off.

The black bear is most dangerous between May and June, as they are travelling with their young and will be very aggressive towards anyone they see as a threat. The animal is very territorial, though they may live near humanoids, and will threaten anyone who enters that territory, most often by making aggressive moves without actually engaging (unless provoked).