Attacking with two weapons is an available combat strategy for characters with a dexterity greater than 12. The combatant must be able to use both weapons one handedly; the secondary weapon may not weigh more than 3½ lbs. The penalty that is incurred by using two weapons is indicated on the chart shown. Each attack will expend 2 action points (AP) as usual, so the combatant who wishes to use two weapons in this manner should be lightly encumbered. 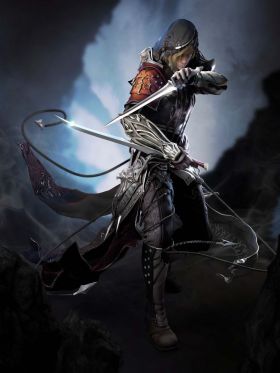 A fist can be used as a secondary weapon; the benefit of this is that it does not need to be drawn or sheathed, meaning that it can be used spontaneously one round and then not another. The drawback is that a character with little strength is unlikely to cause much damage with it.

If the character has sufficient levels or skill to have multiple attacks per round, that will not only adjust the AP spent to only 1 point per weapon, but it also counteract the penalty for use. For example, Petra has a 16 dexterity and normally attacks with two weapons, accepting the penalty. However, upon becoming a 4th level fighter, she increases the number of attacks she makes to five every four rounds. For three rounds, she still attacks as she did at 3rd level; on the fourth round, however she gets two attacks; these are both made with 1 AP each and neither has any penalty at all. Additionally, if she wishes, she may choose to attack twice with her primary weapon, with the same AP cost, as this is what she'd be able to do if she were only attacking with one weapon and had the benefit of multiple attacks (if only for one round out of every four).

Petra could not, however, option to continue accepting her usual penalties in order to gain four attacks from using two weapons. The choice of taking advantage of this style of fighting does not award her more than two attacks. The benefit of multiple attacks is that her two normally penalized attacks become stronger.