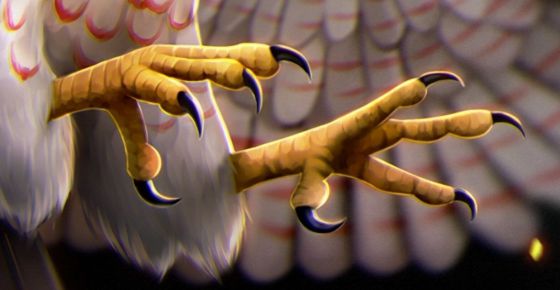 Talons are a form of attack employed by some animals, monsters and humanoids to cause damage. Similar to claws, talons are more dangerous, possessing a hooked, sharpened edge, capable of lacerating flesh, disemboweling an enemy and causing wounds with unusual alacrity. Talons are favoured by bird-like creatures and dragons.

Taloned creatures are usually equipped on their forelimbs, but some have back talons as well. Creatures with an intelligence of 2 or less will always use both talons to attack the same target, along with other attacks they have. Creatures with an intelligence of 3 to 4 will coordinate one talon with their other attacks against a single target, while slashing with the free talon to drive back additional enemies.

When a creature with talons rolls a natural 20 as a critical hit, the hit causes a wound regardless of the amount of damage done. This is due to the talon's exception ability to rip open flesh. Additionally, if a creature causes 11 or more damage with its talon — an amount that would normally produce a wound — then the amount of hit points bled each round is increased by +1 due to the wound being caused with a talon.