Jackalwere are humanoids with a jackal's head and a contorted, wolf-like body are covered with tufted, short hair. Their legs and feet are extremely lean and slightly out of proportion to their upper bodies, to provide flexibility. Jackalwere have lost the ability to run on four legs. Though usually confused with lycanthropy, jackalweres do not suffer from, or spread this disease; the notion that these creatures are lycanthropes has arisen from the jackalwere's ability to spontaneously alter their appearance through a natural ability resembling the illusionary alter self spell. This is further complicated by the creature's habit of sometimes communicating through barking and sometimes through normal common speech. 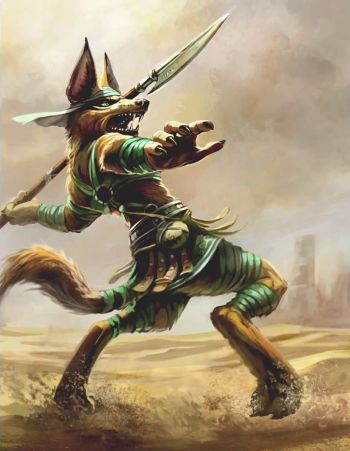 The origin of these humanoids can be traced to the rule of the pharoah Sechemchet in 2640 BCE, who called upon the war god Wepwawet to call forth an army that would enable him to defeat an enemy, whose nature is not known to modern scholars. Wepwawet, whose power was to open the mouth of the netherworld, that the dead could enter, brought forth an army of one thousand jackalweres. The pharoah looked at these creatures in horror and begged Wepwawet to send them back; the god agreed, but not before allowing the jackalweres to slaughter Sechemchet, who died without having completed his tomb.

Afterwards, in reward, Wepwawet did not return the jackalwere to their origins; instead, he sent them to a land in the dark heart of Africa, which he promised would be theirs if they were able to defeat the peoples there. With a will, the jackalwere slaughtered and enslaved the people there. They taught the art of war and learned the arts of cultivation; but their numbers dwindled, for though they were long-lived, for they could not procreate among themselves. After a thousand years, the last handful surviving at last discovered the magics that would let them breed themselves through humans; from thence they began to proliferate slowly. After 1,300 BCE, under their guidance the Nok Culture of present-day Hausa lands began to rise. 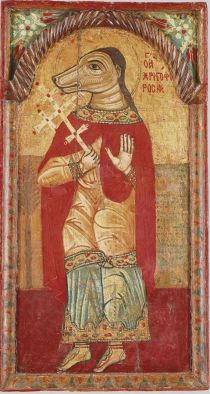 Jackalweres had restored their original numbers after another thousand years; they ruled over several primitive states throughout the Sahel from the Niger River to Darfur. Trade was established with the Mediterranean and an empire of human subjects under jackalwere overlords ushered in the bilateral establishment of two large states, Bornu and Kanem. These would act agreeably with one another, destroying enemies and assuring the absolute authority of the jackalwere masters. Because they could not be usurped through revolution, due to their magical nature, their subjects were doomed to lives of perpetual servitude and humility.

Relations in the West

Because jackalwere are intelligent, they have sent embassies to other lands, where they have been curiously welcomed. In the first century, the apostles Andrew and Bartholomew encountered jackalwere in Egypt and counselled with them. St. Augustine of Hippo welcomed six jackalwere to his monastery in 408 AD, where they remained for three years and were said to be baptised. A confusion has arisen between the 3rd century human St. Christopher and a devout jackalwere who became a Christian priest during the time of Emperor Heraclius in the 6th century, who called himself "Christopher the Kind." The image shown is often attributed to St. Christopher due to the misunderstanding.

Apart from the forementioned ability to alter self, jackalwere have a remarkable 16 dexterity, allowing them a natural armour class of 4. They are immune to attacks with wooden or bronze weapons, and can only be hurt by weapons made of iron, or magic weapons. As they are formidable fighters, this has not kept them from enabling the African cultures they control to make iron weapons, but the distribution and possession of these weapons is sharply controlled by jackalwere guards.

If they so wish, jackalwere can compel an enemy to fall asleep, if a saving throw against magic fails. This effect works according to the spell of the same name.

Jackalwere have studied in the domestication of jackals. There is a 20% that any one will be attended by 3-6 attending jackals. Usually, only one jackalwere in an encountered group will make use of this, from choice; jackalwere do not want to be constantly surrounded by scores of jackals. However, in war, they will gather all they can find.

Jackalwere are proficient in three weapons, which they prefer: javelin, bow and mace. Maces are varyingly made from either iron or bronze. They are able to cause 2-8 damage with a claw. In war, they wear leather armor and (50%) shields. They elect their leaders and never make morale checks.

Sub-chiefs will be present only if there are four groups appearing, and chieftains only if there are ten groups appearing. Both of these circumstances are rare, the latter occurring only in towns or cities, over which a single chieftain will commonly hold authority through other jackalwere and loyal human overseers. In war, humans will be organized as independent cohorts, generally conforming to tribal organisation.