Shield as a Weapon (sage ability) 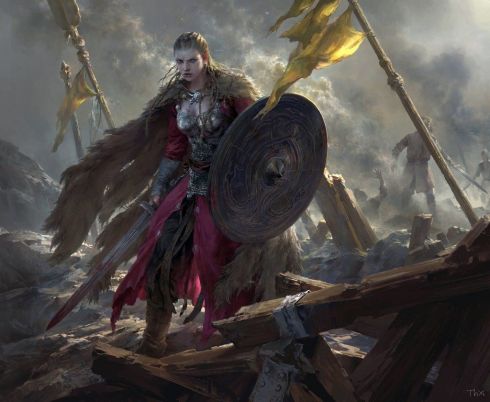 Using the shield as a weapon is a sage ability associated with combat. Ordinarily, combatants cannot use shields as weapons, except when possessing this ability. Generally, the edge of the shield is used to strike for 1-4 damage. When used as a weapon, the shield will serve simultaneously to provide its usual armour class adjustment for the combatant. The shield cannot be hurled effectively at opponents.

Like any weapon, the character must be proficient in the shield or suffer a penalty in accordance with their class. Further, the rules associated with attacking with two weapons also apply, if the character is using a weapon in their other hand. The shield always acts as the combatant's secondary weapon, except when the character is charging. This means that the combatant with this sage ability still must have a dexterity of 13 or more to be eligible to use the shield as a second weapon. If the shield is used alone, dexterity is not a factor.

When charging, the shield is treated as the primary weapon of the attacker, and any other weapon used by the character as the secondary. Shields cannot be used to perform a passing charge against an enemy.

When attacking with a shield and a natural 1 is rolled, the shield is not dropped if it is strapped to the combatant's arm. However, the fumble would mean striking a surface with the shield, or wrenching its weight unnaturally. To account for this, the combatant must roll 2d6; a roll of "2" results in an injury of 2-8 points from the arm being fractured (2-3) or broken (4-8). The shield will be useless and the character will be -4 to hit and armour class until the shield is removed. If the shield is not strapped to the arm, then it will drop to the ground like any other weapon.