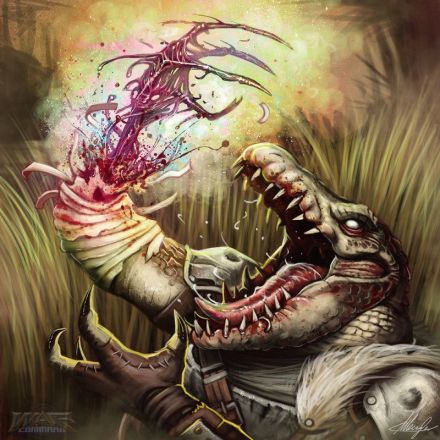 Replaces body parts that have been lost or irrevocably damaged. The spell will replace fingers, toes, hands, feet, arms, legs, tails or even the heads of multi-headed creatures, as well as healing broken bones or replacing organs.

If the part that has been lost is present, the time necessary to regenerate the part is but 1 round. However, if the part must be restored from scratch, it will take 8-80 rounds (8d10).

The limb may be partially useful prior to its full regeneration, but this must be judged according to what part is regenerating, and to what use it is put to.

The reverse of the spell, wither, will cause the member or organ of a creature touched to shrivel and cease to function within 1 round, dropping off into dust in 4-40 rounds. There is no saving throw. The body limb will leave behind a patch of skin that will appear as if healed for several months.

Withering a limb will cause damage equal to half that for amputating a limb. Note that because the stump is healed over, there will be no injury damage caused by the regeneration spell.