A humanoid of mysterious, probably unnatural creation through manipulation of trait inheritance of large frogs, granting these creatures self-awareness. Otherwise known as killer frogs. The best known outbreak of these creatures was the attack on the city of Stavanger in Norway in the early summer of 1650 … but legends tell of attacks in the distant past, as far back as the time of the Romans. Though lost, it is believed that the secret of the frogling's making still exists. 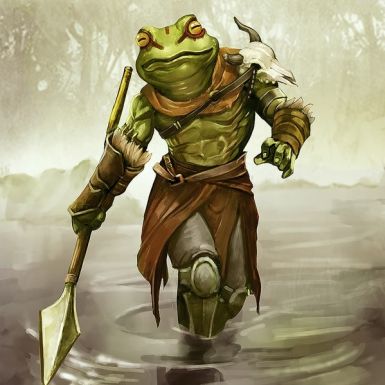 Primarily a subterranean creature, froglings are comfortable in cold weather, suggesting some relationship with ice toads. They prefer wet, temperate climates. Highly intelligent, organized and aggressive, froglings are competent builders and possess a highly structured militaristic hierarchy. Their religion favors live sacrifices of humanoids — and through these sacrifices there is evidence to show that froglings are able to inculcate living souls into magical devices.

The creatures possess sharp teeth and talons, but are able to forge adamantite into weapons, liking spears, swords, and short axes. These will all be +1 to damage caused. Many of their number are skilled with light crossbows, the intricate design of which includes pieces of adamantium for strength and a +1 accuracy. They are able to load these with a mechanical aid built into the crossbow, but due to the minimal arm strength froglings are unable to use bows.

The skin of a killer frog varies from lutescent green to greenish blue, with grey streaks that follow along their blood veins. Orange coloring appears on some individuals.

During combat, they are able to hop, expending 1 action point in order to leap forward 15 feet, or three additional combat hexes. They are able to throw or fire weapons accurately in mid-hop, which is often a preferred tactic as the leap gives them the advantage of line-of-sight during a melee. When moving in a large group, they will tend to rush in progressive leaps at a terrifying speed, so that the sight of three hundred froglings as they approach can be distressing. In thick forests, they will leap from tree to tree rather than run at ground level.

Despite the number appearing, a typical patrol of froglings will include 7—12 individuals, including two leveled fighters. A small war party will have anywhere from 20—40 individuals, about a fifth of whom will be trained fighters. Any full-out attack by the froglings will include at least half their total number; the creatures will usually launch such an attack soon after they become aware of any humanoid presence near their lair. During battle, they kill indiscriminately; however, they will collect any wounded, restore them to health and then ready them for ritual slaughter, usually accomplished by throwing the victim from a cliff height above an underground cavern.

Froglings can rise up to 7th level as fighters.